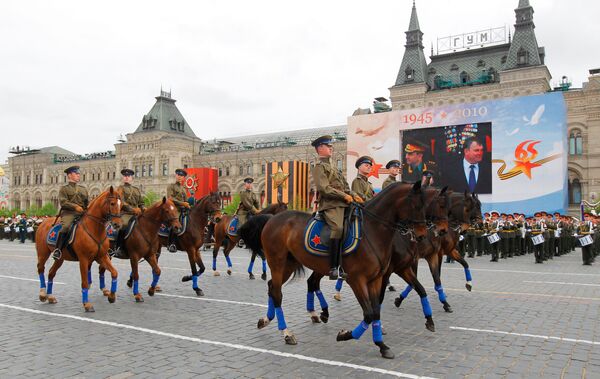 A military parade involving over 10,000 personnel, 150 tracked and wheeled military vehicles, as well as 127 aircraft and helicopters was launched on Moscow's Red Square at 10:00 a.m. Moscow time (06:00 GMT) on Sunday, when Russia celebrates Victory Day.

A military parade involving over 10,000 personnel, 150 tracked and wheeled military vehicles, as well as 127 aircraft and helicopters was launched on Moscow's Red Square at 10:00 a.m. Moscow time (06:00 GMT) on Sunday, when Russia celebrates Victory Day.

Victory Day marks the final surrender by Nazi Germany to the U.S.S.R. in WWII, often referred to as the Great Patriotic War in Russia and other states in the former Soviet Union.

Russian President Dmitry Medvedev addressed the participants and guests at the beginning of the parade.

"This war made us a strong nation...We have won not simply a military victory but also a moral victory," Medvedev said.

The parade, which is accompanied by over 50 Russian and foreign military orchestras with 1,200 musicians, is divided into three parts - a march pass, involving military personnel, followed by sophisticated hardware and a fly over by combat aircraft.

U.S., British, Polish and French troops will march alongside the Russian military units in the parade on Moscow's Red Square for the first time in history.

The Russian president called for united international efforts to face new challenges and global threats and to prevent tragedies similar to World War II, which took lives of an estimated 60 mln people around the world.

"The joint march [on Red Square] symbolizes our readiness to defend peace, to prevent the revision of the results of the war, to prevent new tragedies," Medvedev said.

RIA Novosti broadcasts the parade live on its website.

Over 102,000 military servicemen and about 200,000 World War II veterans across Russia are expected to take part in festivities dedicated to the 65th anniversary of victory over Nazi Germany.

The first Victory Parade was held on Red Square on June 24, 1945 on the order of the then-Supreme Commander-in-Chief, Joseph Stalin.

According to latest studies, the total causalities of the Soviet Union, both soldiers and civilians, were 26.6 million people, of those an estimated 8,668,400 soldiers died.