Russia hands over volumes of Katyn massacre case to Poland 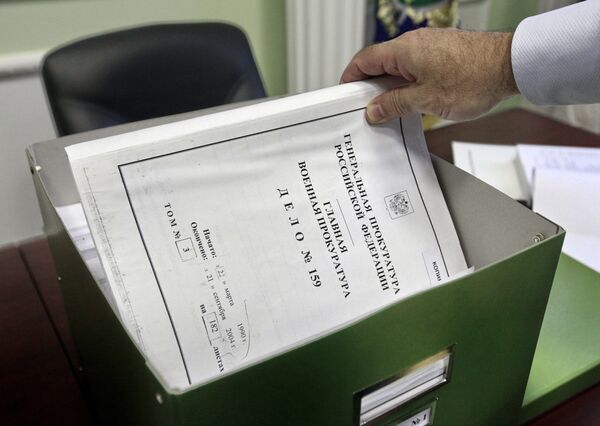 Russia has handed over to Poland 67 volumes of the "criminal case No.159," launched in the 90s to investigate the Soviet-era mass killings of Polish officers.

Russia has handed over to Poland 67 volumes of the "criminal case No.159," launched in the 90s to investigate the Soviet-era mass killings of Polish officers.

Russian President Dmitry Medvedev handed one of the volumes to the acting Polish president, Bronislaw Komorowski.

The Katyn massacre, when thousands of officers, police and civilians taken prisoner during the 1939 partitioning of Poland by the Soviet Union and Nazi Germany were killed, has remained one of the most painful issues in the Russian-Polish relations.

The Soviet Union tried to blame the massacre on Nazi Germany, saying the killings took place in 1941, when the territory was in German hands, until Soviet leader Mikhail Gorbachev formally admitted in 1990 that the executions took place around 1940, and were carried out by the Soviet secret police, the NKVD.

In 1990s, Russia handed to Poland copies of archive documents from the top-secret File No.1, which placed the blame solely on the Soviet Union.

In September 1990 Russian prosecutors also launched a criminal case into the killings of over 21,000 Poles, known as the "Case No.159." Though the case was closed only in 2004, Poland never received the inquiry files before.

Russian President Dmitry Medvedev earlier said archive materials on Katyn and other Soviet-era mass repressions will be made more accessible to the public, in a move which Western experts see as an attempt to improve strained ties with Poland.

He also admitted that Moscow had been guilty of concealing the truth, such as over the Katyn massacre, and said that opening up of documents was an important way to prevent the falsification of history.

At a meeting with Komorowski in Kremlin, the Russian president said further joint investigation into the Soviet-era tragedy was "absolutely necessary."

"I would like to hand you the results of the work we already accomplished, namely 67 volumes of the criminal case No.159," Medvedev told the acting Polish leader.

Shortly after the meeting, the acting president's aide Jacek Michalowski, visited Russia's Prosecutor General's office in Moscow, where he received the copies of the documents.

Medvedev and Komorowski agreed that the two states should continue their efforts in revealing the truth over the decades-old tragedy. The Russian president reiterated that Russia would continue declassifying documents on the Katyn massacre.

The acting Polish president said, in his turn, said that Russia's move might lay a good foundation for improving bilateral relations.

"I'm very thankful for what was said and done. We consider it a beginning of further efforts to untie the Katyn knot," Komorowski said.

The Polish delegation will head to Katyn on Sunday to attend the site of another tragedy which took place in the Katyn forest. On April 10, a Polish presidential plane crashed near the western Russian city of Smolensk in thick fog, killing a high-ranking Polish delegation, including President Lech Kaczynski and first lady Maria.

They were on their way to a ceremony to pay tribute to victims of the Katyn massacre, buried in mass graves in the Katyn war cemetery.

Komorowski, who took over as the Polish leader following Kaczynski's death, received the emblem of Poland, found among the plane's wreckage.

He said the delegation, who is now heading to Katyn and Smolensk, will take the emblem with them "to complete the unaccomplished visit by the Polish delegation led by President Lech Kaczynski."

Relations between Moscow and Warsaw, which have been hampered by historic past events such as Katyn, seem to have improved after Russia showed true compassion following the crash near Smolensk.

"Near the graves in Katyn, we want to feel that the Katyn crime, [and] the lies which divided us, will not come between us again, and that we will be together in the future. Our common history was controversial, and it now depends on us if it will get better," Komorowski said.

Soon after the April 10 plane crash, Russia announced a day of mourning and hundreds of Muscovites came to the Polish embassy to express their condolences to the Polish people.

Russian authorities carried out a thorough investigation of the accident, which satisfied the Polish side. Officials also provided all the necessary assistance for the families of the plane crash victims who visited the Russian capital.