Russian billions to save Ukraine 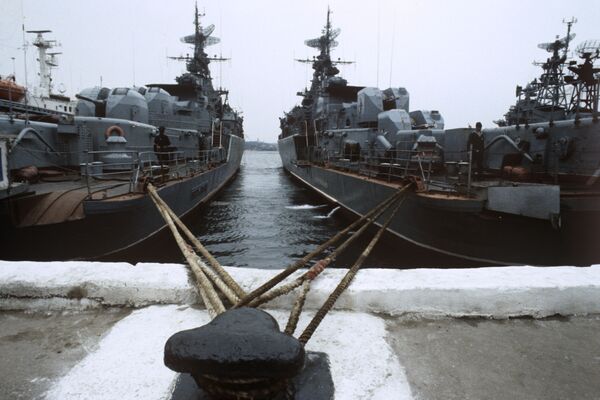 The agreement on Russia's Black Sea Fleet continues to be the subject of heated debate in both Russia and Ukraine. However, the concerns expressed by opposition parties and the public differ significantly in the two countries.

The agreement on Russia's Black Sea Fleet continues to be the subject of heated debate in both Russia and Ukraine. However, the concerns expressed by opposition parties and the public differ significantly in the two countries.

The agreement's detractors in Ukraine are worried that extending the foreign naval base's lease will undermine the sovereignty of their country. In Russia, opponents are mostly concerned about the agreement's high price tag.

Presidents Dmitry Medvedev and Viktor Yanukovich have agreed that Kiev would get a 30% discount on supplies of Russian natural gas, and that this discount would count as Russia's lease payment for the naval base in Sevastopol, a fee that is quite substantial.

Prime Minister Putin was quite outspoken when discussing the agreement at a news conference in Kiev. "In my opinion, the price we were asked to pay is absolutely exorbitant. For that money, I could have eaten up Mr Yanukovich together with your prime minister. No military base in the world is worth that much money. If you add up the amount to be paid over the 10 years the contract covers, it will come up to $40 or $45 billion. We could build several such bases for that amount."

President Medvedev put it somewhat differently. "The price we are paying to station our fleet is large, but not exorbitant. It is not exorbitant because we have strategic relations. And we expect that relations of this kind will continue forever. These are centuries-old ties, and consequently they should be backed by mutual assistance."

However, differences between Russian leaders are merely stylistic. In the very same speech as the one quoted above, Mr Putin clarified the position of the Russian leadership. "For us, this is certainly not just a financial matter, but also a matter of cooperation with Ukraine. Military cooperation increases the level of trust between our two countries, allowing us to work very closely on economic, social, and political issues. And this is the most important factor."

Thus, it appears that the tens of billions of dollars are not payment for the fleet or the naval base, but rather for stability and long-term, mutually beneficial cooperation with Ukraine. Payment for good relations between good neighbors.

Indeed, under the previous Ukrainian President Viktor Yushchenko, relations between our countries were far from cloudless. It even seemed as if they were beginning to mirror relations with Georgia, with Sevastopol naval base playing precisely the same irritating role as Abkhazia and South Ossetia. Official Kiev openly stated its intentions to throw out the remnants of the Russian Fleet from the Crimea, while local residents strongly opposed it. Radical Ukrainian nationalists poured fuel to the fire spreading rumours that local residents would be deprived of Ukrainian citizenship en masse and receive Russian citizenship instead.

A serious conflict could have erupted and inflamed the situation on our southern borders. Some hotheads even talked about a possibility of a fratricidal war, which would have global geopolitical effects. Furthermore, without the Russian fleet in Sevastopol, the city would have been doomed to destruction and extinction. All of this should have been prevented at any cost. Now this problem has been solved. The fleet will stay in Sevastopol, and the whole of the Crimea can live and develop peacefully. The emotions have subsided.

But in international relations statesmen are rarely guided exclusively by emotions; they always have quite rational arguments. Russian analysts believe that Ukraine is on the brink of economic collapse, sovereign default and government bankruptcy. The current situation is the result of the global economic downturn and the reckless, populist economic policies of Yulia Tymoshenko's government, which misused public funds to secure voter support in the coming elections.

A threat of this kind could be even more serious than a potential battle for Sevastopol, and could perhaps be comparable to a political Chernobyl. Regardless of sovereignty, no country can be completely isolated in today's world. Therefore, Ukraine's economic collapse would have been devastating for neighboring Russia. Thus, Moscow is essentially providing these billions of dollars to Viktor Yanukovich to save the Ukrainian economy, especially since neither the IMF nor the European Union are prepared to provide any significant financial assistance to Kiev.

Nevertheless, questions do arise. One such question was raised by the leader of the Liberal Democratic Party, Vladimir Zhirinovsky, during a debate in the State Duma. Zhirinovsky asked what will happen if in five years a different president and government come to power in Ukraine and renounce the present agreements?

The fears of Mr Zhirinovsky and many other opposition politicians in Russia can hardly be considered reasonable. The billions of dollars will neither be loaned to Kiev nor paid up front, but provided only if Ukraine complies with the agreement's provisions. If a future Ukrainian government decides to withdraw from the agreement, it may as well do that, but in that case nobody will be paying anything to Kiev. The price of natural gas will go up again, and the billions will be spent on setting up a new base for the Black Sea Fleet.

Of course, this is a very undesirable scenario. And Mr Yanukovich and the government controlled by his Party of Regions have five years to spend the billions effectively and save the country's economy, in which case Ukrainian voters will have no reason to bring a new government to power.

It is a different question as to whether Russia can afford this enormous amount. Vladimir Putin has already said that "These are very significant funds for the Russian budget. We have started preparing the budget for 2011, and we will have shortfall revenues of $4 billion next year." "These are very challenging numbers, but we will manage," added the Prime Minister.