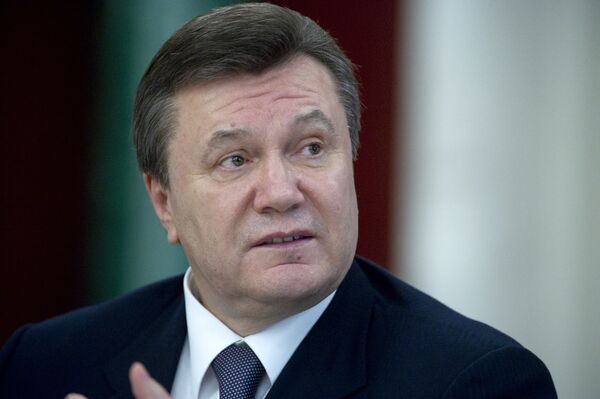 Ukrainian President Viktor Yanukovych on Thursday defended the Russian Navy base deal extending Russian naval presence in the country until 2042, saying the naval base deal is a small price for establishing better Russia-Ukraine ties.

"Did we pay too much for that? No, because the agreements reached with Moscow are mutually beneficial," Yanukovych said in his address to nation.

Yanukovych on Thursday signed into law the naval base deal ratification after it was passed in Ukraine's parliament.

On Tuesday, the Ukrainian parliament ratified the agreement despite brawls and smoke bombs being thrown into the chamber during sessions. Opponents and supporters of the deal also clashed outside the parliament.

The Ukrainian president warned opposition members against trying to fuel a domestic conflict.

"It [opposition] is seeking to dissolve the parliament again in the name of so-called political expediency because it understands that stability, strong power, order and normalization of relations with Russia would mean its political death," Yanukovych said adding the opposition "hungers for power at any price."

Yanukovych said he managed "to resolve the problem inherited from the prior government, to normalize relations with Russia and to renegotiate the crushing gas contracts that put the state on the brink of social and economic collapse."

Yanukovych in his address called for "stability and development, and the ability to work normally." He said Ukraine "will achieve this, just as it had stood up to the opponents of changes for the better."