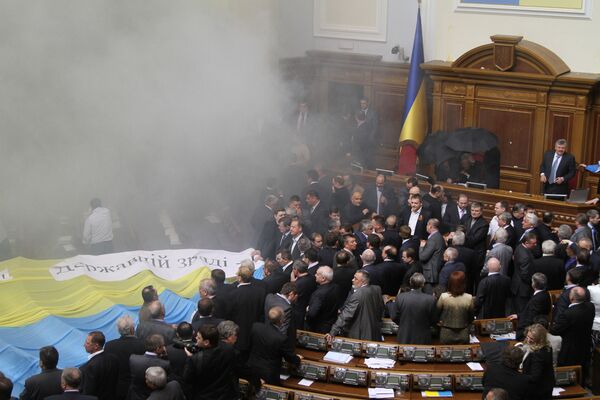 © RIA Novosti . Grigori Vasilenko
/
Go to the photo bank
Subscribe
Moscow hailed the ratification of a deal to extend the lease on a Russian naval base in Crimea, which took place on Tuesday amid clashes and brawls, both outside and inside the Ukrainian parliament.

Moscow hailed the ratification of a deal to extend the lease on a Russian naval base in Crimea, which took place on Tuesday amid clashes and brawls, both outside and inside the Ukrainian parliament.

Neither eggs thrown at the Supreme Rada speaker during the heated debate, nor the crowds of opposition supporters who gathered in front of the parliament building protesting against the deal prevented a majority of lawmakers in the 450-seat parliament from ratifying the groundbreaking agreement.

The pact allows the Russian base to remain in the Ukrainian port of Sevastopol for 25 years after the current lease expires in 2017 and stipulates that the lease may be further extended by another five years. In return, Ukraine will receive a 30% discount on Russian natural gas.

Half an hour after Ukraine's Supreme Rada passed the bill, the lower chamber of the Russian parliament also ratified the agreement.

Russian President Dmitry Medvedev and his Ukrainian counterpart Viktor Yanukovych congratulated each other on the simultaneous ratification of the deal during a telephone conversation.

Earlier in the day, Medvedev said the ratification indicated "a triumph of reason and strategic interests over short-term emotions." He also said that the $100-million annual rent which Russia would pay is high but not overpriced.

"We hope such relations will continue forever; they are ancestral links. Such friendship should be accompanied by mutual support," Medvedev said.

Putin also said the developments meant that despite the "hooligan" behavior of the opposition lawmakers during Tuesday's debate the "path to the stabilization of the political situation" had begun.

Former Ukrainian premier Yulia Tymoshenko, whose eponymous party moved into opposition after Yanukovych became president, said that ratification of the deal was "a black page" in the country's history, and called for a popular uprising against the current leadership. She said she would tour Ukraine "to unite people" against the "gang which is now in power."

She said she would also seek early elections to choose a new parliament which would denounce the deal.

However, the two former allies in the pro-Western 2004 Orange Revolution seem to be reluctant to join forces again.

Oleh Tyahnybok, the leader of Ukraine's nationalist movement Svoboda (Freedom), made a more radical announcement, saying that his movement would kickstart a revolution in Ukraine.

"From now on the new Ukrainian national revolution begins," he said.

Ukrainian Prime Minister Mykola Azarov pledged "an adequate and tough" response to those trying to escalate tensions between pro-Russian and pro-Western forces.

"We already said that we can respond to force with force, but will never be the first to use it. If anyone tries to apply the 'language of force,' he will get an adequate and tough response," he said.

Taras Stetskiv from the opposition bloc accused lawmakers from pro-presidential Party of Regions of assaulting his colleague, who, he said, was peacefully standing near his seat carrying a yellow-blue Ukrainian flag as smoke bombs exploded in the chamber.

"[Oles] Doniy has concussion. They [Party of Regions lawmakers] were villainous even in a physical battle - they struck Doniy twice on the back of the head," the lawmaker was quoted by Tymoshenko bloc's press service as saying.

Doniy was not the only lawmaker to receive injuries, he said, adding that some elderly lawmakers had also been assaulted.

Lawmakers of the Party of Regions were forced to protect the speaker of the Ukrainian parliament, Volodymyr Lytvyn, with umbrellas as opposition MPs threw eggs at the rostrum.

'DOWN WITH YANUKOVYCH', SAY PROTESTERS

About 7,000 protestors and supporters gathered in front of parliament, according to police estimates. Despite numerous clashes with police and pro-presidential forces, no serious injuries were reported.

Members of the nationalist movement Svoboda paralyzed traffic as they marched along Kiev's main street, Khreshchatik, chanting "Down with Yanukovych!" "Hail Ukraine!" and "Death to our enemies!"

Traffic in the city center, which was halted during the rally, has already resumed.

The sound of car horns and shouts of "Sevastopol, Crimea, Russia!" and "Sevastopol and the fleet are indivisible" rang through Sevastopol, as the city where Russian Black Sea Fleet's main base is located welcomed the extension of the lease agreement.

Residents gathered on Tuesday afternoon near the monument to Russian Empress Catherine the Great to show their support for Yanukovych.

The crowd marched in the city center, waving Russian tricolors and St. Andrew's flags, the symbol of the Russian Navy.