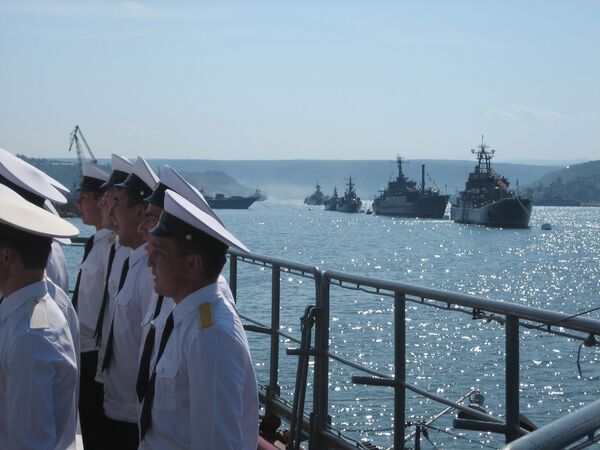 RIA Novosti distributed some 6,000 St. George ribbons among all Russian Navy fleets to mark the anniversary of the end of World War II.

The campaign, which was initiated by RIA Novosti and the Student Community youth organization, commemorates the heroes of the eastern front and involves hundreds of partners in Russia and abroad.

“Six thousand ribbons were handed out today to representatives of the Russian fleets - of the Black Sea Fleet, the Baltic Fleet, the Pacific Fleet, the Caspian Flotilla and the Navy headquarters in Moscow,” Yekaterina Korolyova, one of the campaign’s organizers, said.

More than 55 million orange and black ribbons have been distributed across the globe since the campaign was first held in 2005. Ahead of Victory Day, people in many countries decorate their cars, clothes and everything else with the ribbons as an expression of their respect for those who died during the war.

Orange and black are the traditional colors of Soviet and Russian awards for achievements in combat. The black and orange stripes symbolize smoke and fire.

More than 10 million ribbons were distributed last year, including around 2 million abroad. Russian diasporas in many countries, including Britain, the United States, Mexico, Argentina, Iceland, Turkey, China, the United Arab Emirates, Greece and Vietnam took part in the project.