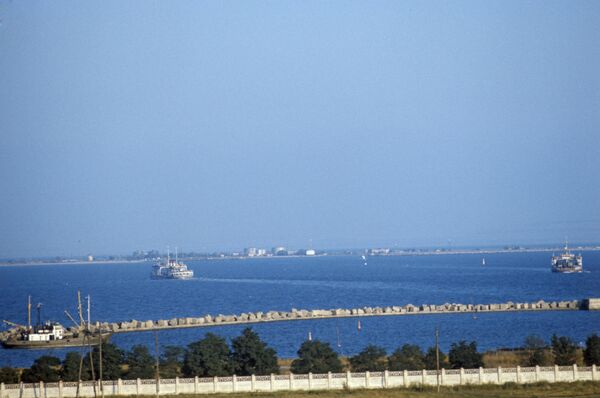 © RIA Novosti . Vladimir Bogatyrev
/
Go to the photo bank
Subscribe
Russia and Ukraine have decided to revive plans to build a bridge across the Kerch Strait to unite the two countries' southern Black Sea regions, Chairman of the Crimean Council of Ministers Vasyl Dzharty said on Monday

Russia and Ukraine have decided to revive plans to build a bridge across the Kerch Strait to unite the two countries' southern Black Sea regions, Chairman of the Crimean Council of Ministers Vasyl Dzharty said on Monday.

The Ukrainian Foreign Ministry refused to budget the construction of the bridge in 2008 until Russia and Ukraine agreed on the international boundaries of the Kerch Strait.

The construction of the bridge would shorten the distance between the two transportation hubs of Kherson and Novorossiysk by 450 kilometers (280 miles). President Viktor Yanukovych promised in his 2010 campaign to build the bridge.

"We are waiting for Viktor Yanukovych's instructions to build the bridge," Dzharty said, adding that the document is expected "any day."

He said Russia was interested in opening the bridge by 2014 before the Winter Olympics are to be held in Russia's Black Sea resort of Sochi.

Dzharty said the length of the bridge would be between five and ten kilometers depending on where it is built exactly. He said there were five or six different project plans to study before making a final statement on the bridge's span. One of the plans includes an underground tunnel between the two ex-Soviet states.

"Medvedev said that the bridge should be built by 2014. It will be a huge breakthrough for us, the residents of Crimea, mainly an economic and social one. This will be a development of infrastructure, communications, and recreation," Kyiv Post quoted Dzharty as saying.

He said the construction including the infrastructure for developing the project was $1.4-$1.7 billion and would be built on a "50-50 partnership" with Russia, adding that with the construction of the new bridge, "a new life for Eastern Crimea would begin."