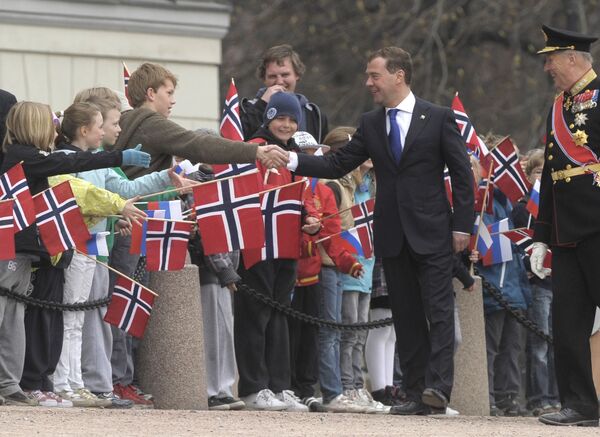 On April 26, President Dmitry Medvedev depart Moscow for his "Nordic tour", which will take him to Norway on April 26 and 27 and to Denmark on April 27 and 28

On April 26, President Dmitry Medvedev depart Moscow for his "Nordic tour", which will take him to Norway on April 26 and 27 and to Denmark on April 27 and 28.

Incidentally, Norway is the only NATO country that celebrates the end of World War II on the same day as Russia, May 9. In Norway it's called Frigjoringsdag 1945, or Liberation Day 1945. The north of the country was liberated by the Soviet Army, and Medvedev will lay a wreath at the memorial to the Soviet soldiers killed in Norway.

Russia's relations with its Nordic neighbors have never been smooth, with periods of freezes and thaws, friendship and tension. Medvedev's upcoming visits apparently indicate that relations are warming.

The Oslo talks will focus on our traditional "set of Nordic issues" - further delimitation of border in the Barents Sea, energy cooperation, fishing, cooperation between law enforcement agencies, "northern" regional problems and developing the resources of the Arctic.

In July 2007, Russia and Norway signed an agreement delineating the offshore zones in Varangerfjord in the Barents Sea; now it is time to discuss other borders in the Barents Sea. This is an extremely important issue, as the area is rich in offshore oil and gas reserves. The countries should take their time and be precise. The talks could result in an agreement on another border section occupying nearly 175,000 sq km in the disputed northern part of the Barents Sea. Norway initially proposed a "simple" solution that would draw the border along lines of longitude. But Russia did not acquiesce, in a show of Nordic tenacity, and now a solution is being worked out for each specific section of the border.

Energy will certainly be a major focus of the talks between the President Medvedev and Norwegian Prime Minister Jens Stoltenberg. Norway is the world's third largest oil exporter after Saudi Arabia and Russia, and it has abundant natural gas reserves. Norway is now keenly interested in Russia's Shtokman field in the eastern part of the Barents Sea. Norway's StatoilHydro holds a 24% stake in Shtokman Development AG, which is the developer of the Shtokman field. Gazprom holds a controlling 51% stake, while the French company, Total, owns 25%. Norway has been trying to persuade Russia to let it join the project as a partial owner, but Russia has so far resisted.

Shtokman holds an estimated 3.8 trillion cubic meters of gas and 37 million metric tons of gas condensate, which is enough to keep the field producing for 50 years.

The uncertainty surrounding Shtokman has Norwegian businesses seriously concerned. The start date of the project has been pushed back several times already. Currently, the first supplies of liquefied natural gas (LNG) are expected in 2014. Pipeline gas is expected to first reach consumers in 2013. However, Medvedev said the final decision on pipeline gas would be made in March 2011, while the decision on LNG would come even later in the year. This means that pipeline gas production and transportation may begin as late as 2016, with the production of LNG following in 2017. The Russian president cited the global economic and financial crisis as the cause of the delays.

Fishing is another major stumbling block between Russia and Norway. Norwegians complain that Russian poachers often fish in its waters using nets with mesh sizes that are under regulation. They estimate that Russia catches $154 million worth of fish a year in Norway's exclusive zones, mainly around Svalbard. Russian fishermen allegedly catch 100,000 tons of illegal cod alone.

For their part, Russian fishermen claim that Norway has no right to extend its laws to the exclusive economic zones around Svalbard, as these zones are regulated by clauses of the Spitsbergen Treaty, signed in Paris in 1920, that authorize all signatories, Russia included, to fish in those waters. Thirty-seven other countries share Russia's position and do not recognize Norway's claims to the waters around Svalbard.

Norway's claims smack of a covert attempt to oust Russian fishermen from the area, so that the Norwegians can have it all for themselves. Considering the fact that most of the fish, especially cod, ends up at Norwegian ports anyway, there can be no other explanation. But Russia still has some leverage over Norway when it comes to fish: seafood accounts for 69% of Norway's exports to Russia.

As for Copenhagen, no Russian leader has visited the Danish capital since Nikita Khrushchev went in 1964. President Medvedev is set to discuss expanding trade and Danish investments in Russia's energy and agricultural sectors, as well as a new structure for European security.