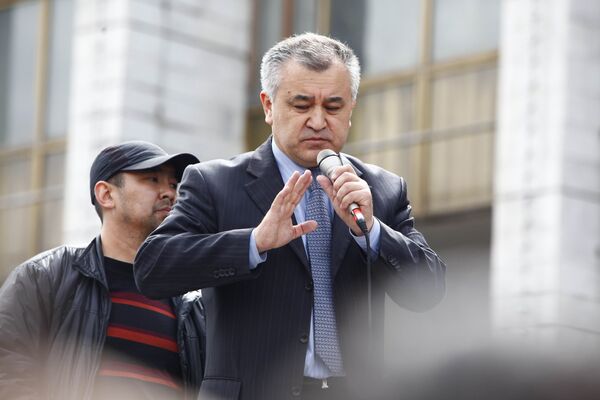 The interim Kyrgyz government published a draft constitution on its site on Monday, which cuts the powers of the president and changes the Kyrgyz presidential regime into a parliamentary one.

The interim Kyrgyz government published a draft constitution on its site on Monday, which cuts the powers of the president and changes the Kyrgyz presidential regime into a parliamentary one.

"A parliamentary regime will be adopted and presidential authority will be restricted. His participation in staffing policy and the economy will be suspended," interim Deputy Prime Minister Omurbek Tekebayev said on Monday.

The draft proposes a presidential term of five years and forbids any one president from serving more than two successive terms.

The Kyrgyz parliament will have 120 deputies (or 105 according to a second version of the draft), elected every five years, with a vote threshold of 5%. No one political party can have more than 65 (or 60) seats in parliament.

The draft constitution names Kyrgyz as the country's national language but Russian as the official language.

"Discrimination of citizens for not knowing the national or official languages is not allowed," the document says.

The constitution draft enables people to rally peacefully and without arms, as long as the government is given prior warning.

Uprisings broke out in Kyrgyzstan on April 6, spreading across the country and lasting several days. Former President Kurmankbek Bakiyev was deposed and forced to flee the capital and later the country. An interim government was formed under Roza Otumbayeva.

"We say unofficially that this is the third Kyrgyz republic. The first was the Soviet republic, the authoritarian rule of Akayev [Bakiyev's predecessor] and Bakiyev was the second, and the third is our parliamentary republic," Tekebayev said.