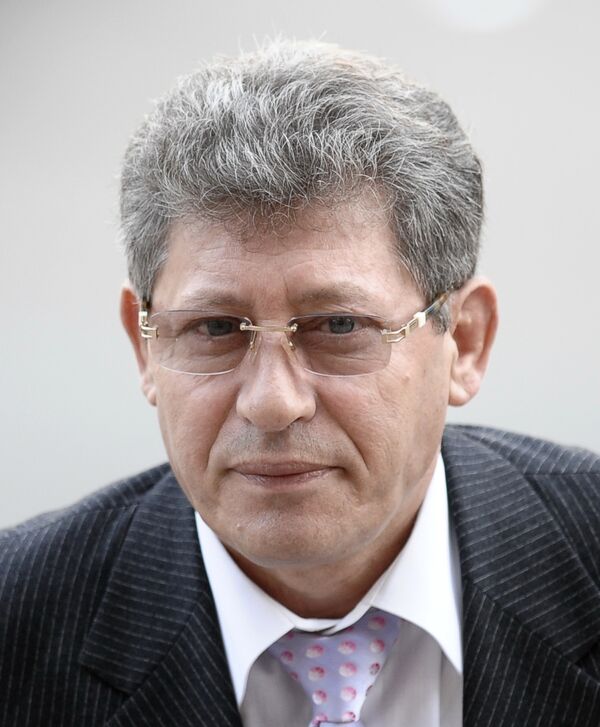 © RIA Novosti . Ruslan Shalapuda
/
Go to the photo bank
Subscribe
The acting Moldovan President Mihai Ghimpu said he will not come to Moscow for this year's Victory Day celebrations as he does not associate himself with the winning side of World War II, a Russian respected daily said on Monday.

The acting Moldovan President Mihai Ghimpu said he will not come to Moscow for this year's Victory Day celebrations as he does not associate himself with the winning side of World War II, a Russian respected daily said on Monday.

Russia will mark the 65th anniversary of victory over Nazi Germany on May 9 with its biggest ever post-Soviet demonstration of military hardware. This year is the first time that troops from other countries will take part in the parade.

Kommersant daily said Ghumpu had previously accepted an invitation from Russian President Dmitry Medvedev and said he would find time to participate in the events. But he changed his mind at the end of last week, despite concerns from other members of the Moldovan ruling coalition.

"I have no ties with Moscow. Only the victorious are going, what will the defeated do there?" he said on Moldovan TV, adding that participation of Moldovan troops in the parade would be enough.

Ghumpu has also said that the 70 Moldovan guards of honor due to take part in the parade are used to marching on asphalt rather than pavement, and so might lag behind the other columns or even faint if they took part in the parade.

Russia has so far dismissed concerns by the Moldova's Finance Ministry that the country cannot afford to participate due to a shortage of funds.

"They were talking about sending a delegation of eight people, including four war veterans," a source in the Russian Foreign Ministry earlier told Kommersant. "Russia is preparted to pay for all travel, accommodation and eating expenses."

Moldova and Romania signed on March 29 an agreement on air force cooperation and discussed the future development of bilateral military contacts.

A source in Moldova's ruling alliance said that by "demonstrating his principles and inflexibility in the face of the all-powerful Kremlin, Ghimpu has become a hero of the nationalist electorate."

It said Ghimpu would attend an informal Commonwealth of Independent States (CIS) Summit in Moscow on May 8 and then return to Chisinau.

During the summit, the presidents of Azerbaijan, Armenia, Belarus, Kazakhstan, Kyrgyzstan, Moldova, Russia, Tajikistan, Turkmenistan, Uzbekistan and Ukraine are expected to address World War II veterans and workers of the home front.

Some experts say that Ghimpu also has personal motives for not attending. His family home was confiscated shortly after the war and his two bothers and father were deported to Siberia.

"I can not forget the misery, deportation and hunger citizens of the Republic of Moldova went through in the Soviet Union," Ghimpu has said.

Experts said whatever the motives, Ghimpu's refusal will not do Moldova any good. Russia can easily block recently recovered exports of Moldovan wines to Russia or impose tougher sanctions against Moldovan guest workers.

Other countries to have confirmed their leaders' participation in the victory celebrations include Armenia, France, Kazakhstan, Latvia, Germany, Serbia, Ukraine and Vietnam. Some sources said that late Polish President Lech Kaczynski confirmed his participation shortly before he died in a plane crash in western Russia on April 10.