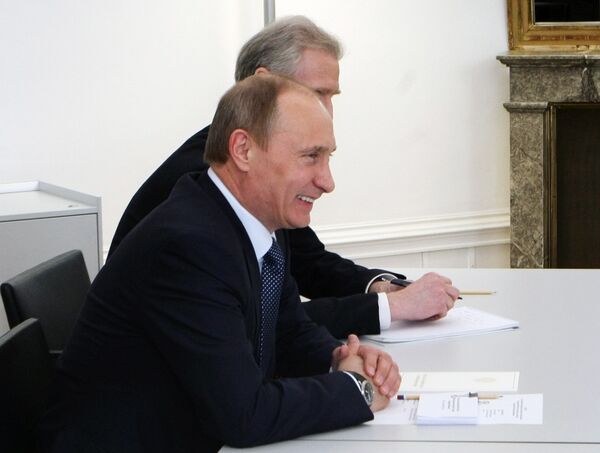 © RIA Novosti . Aleksei Nicolski
/
Go to the photo bank
Subscribe
Russia can guarantee gas to Europe 100 years in advance, Prime Minister Vladimir Putin said in Vienna on Saturday after the signing of a deal to bring Austria into the South Stream project.

Russia can guarantee gas to Europe 100 years in advance, Prime Minister Vladimir Putin said in Vienna on Saturday after the signing of a deal to bring Austria into the South Stream project.

The deal was the last necessary for the go-ahead of the project, designed to carry 31 billion cubic meters of Russian natural gas a year across the Black Sea to Bulgaria and further on to Italy and Austria.

"We can guarantee [gas] 100 years in advance to the growing Russian economy and practically all of our clients in Europe," Putin said at a joint press conference with Austrian Chancellor Werner Faymann.

He noted that just one area in north-east Russia boasted gas reserves of 55 trillion cubic meters.

"Similar gas reserves simply do not exist anywhere in the world," he added.

The pipeline is expected to go into operation in 2015, its capacity eventually reaching 63 billion cubic meters, or some 35% of Russian gas supplies to Europe.

Russia has already signed intergovernmental agreements with Bulgaria, Serbia, Hungary, Slovenia and Croatia to implement the onshore part of the project.

The project is part of Russia's efforts to reduce dependence on transit nations. It is widely seen as a rival project to the EU-backed Nabucco, which would also transport Caspian and Central Asian gas to Europe, but would bypass Russia.

"We intend to realize this project no matter what," Putin went on, adding that after South Stream comes into operation, gas supplies to Austria would "increase by two billion cubic meters."

Putin also said it was "pointless" to start the construction of the Nabucco pipeline without contracts having been signed.

"It is pointless to build the pipeline with contracts. Name me one contract that has been signed on Nabucco. For South Stream, we could conclude contracts right now," he said.

"It's a matter of resources," he went on "What is the pipeline going to be filled with?"

Russian Energy Minister Sergei Shmatko said last week that Russia had no plans to combine part of the South Stream project with the Nabucco pipeline.

Shmatko was commenting on a suggestion by Italy's Eni SpA, Gazprom's partner in South Stream, that combining some sections of the pipelines would cut costs and boost profits.

"We are not discussing such issues," Shmatko said.