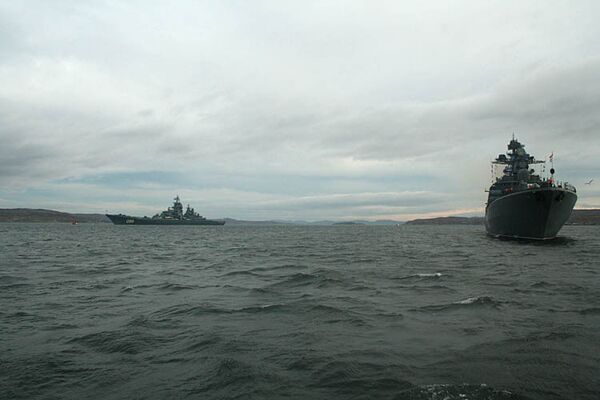 Warships of three Russian fleets will meet in the Sea of Japan during large-scale military exercises in the Far East.

Warships of three Russian fleets will meet in the Sea of Japan during large-scale military exercises in the Far East, a Pacific Fleet source told RIA Novosti on Friday.

The Russian Armed Forces will conduct large-scale Vostok-2010 military exercises in Siberia and Far East in June-July. The exact date of the drills is yet to be announced.

The flagships of the Northern Fleet and the Black Sea Fleet, the Pyotr Veliky nuclear-powered missile cruiser and the Moskva missile cruiser, respectively, are expected to join warships of the Pacific Fleet during the exercise, the source said.

"During the Vostok exercise, warships of the three Russian fleets will conduct joint maneuvers with firing at naval and aerial targets. In addition, they will train elements of joint combat and repelling underwater and aerial attacks," the source said.

The upcoming land drills will involve units from the Far Eastern, the Siberian and the Volga-Urals military districts.

As part of the drills, the Armed Forces will practice the deployment of additional troops in Siberia and the Far East to strengthen the existing military contingent in the region in case of a potential military conflict.