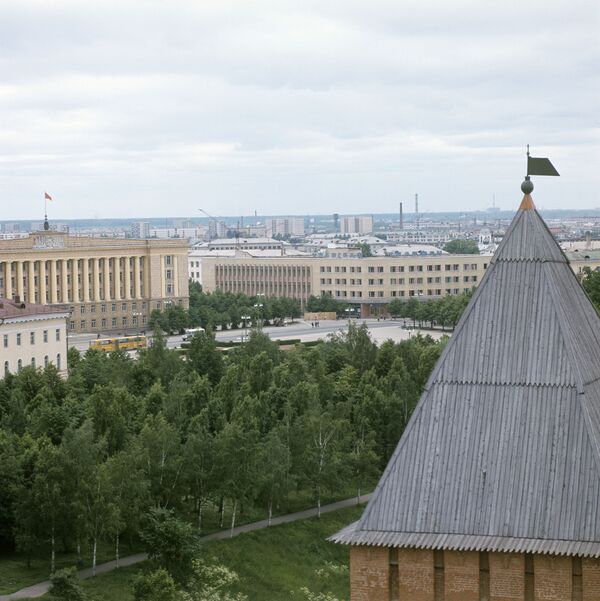 © RIA Novosti . Boris Kaufman
/
Go to the photo bank
Subscribe
Politicians, scientists and diplomats from Russia, Poland, Finland and Estonia will discuss European and national security issues during a two-day conference, which will open in the Russian city of Veliky Novgorod on Thursday, a spokesman for the local Mayor's Office has said.

Politicians, scientists and diplomats from Russia, Poland, Finland and Estonia will discuss European and national security issues during a two-day conference, which will open in the Russian city of Veliky Novgorod on Thursday, a spokesman for the local Mayor's Office has said.

Participants in the conference entitled "New Trends of European Security: How We Begin the 21st Century?" are expected to discuss "the issues related to recent changes in the European and national security models, cooperation between Russia and NATO, attempts to review the results of WWII, and new technologies used in 'information wars'", the spokesman said.

The conference will take place in Veliky Novgorod, near Russia's second city of St. Petersburg, for the ninth time. If was first held in 2002.

Russian President Dmitry Medvedev proposed drawing up a new pan-European security pact in June 2008, and Russia published a draft of the treaty on November 29, 2009, sending copies to heads of state and international organizations, including NATO.

Moscow has long opposed U.S. plans to place elements of its missile defense network in eastern Europe, and hoped that the controversy over the U.S. missile shield had been resolved last year when the Obama administration scrapped plans to deploy interceptor missiles in Poland and a radar in the Czech Republic.

However, Washington's new phased-in approach for European missile defense, which adds a naval component and could involve not only Poland and the Czech Republic but also Romania and Bulgaria, makes the potential threat to Russian nuclear deterrent even stronger.

To alleviate Russia's concerns, Washington agreed to declare a link between the reduction of strategic offensive weapons and the development of missile defenses in a new U.S-Russian strategic arms reduction treaty signed in Prague on April 8.

Following the signing of the new arms reduction deal, Russia proposed cooperation with the United States and NATO in creating a global missile defense system.

In March, the UN and the Collective Security Treaty Organization (CSTO), a post-Soviet security group, signed a declaration of cooperation between their secretariats. The signing took place during UN Secretary General Ban Ki-moon's visit to Moscow.

The CSTO, which is made up of Armenia, Belarus, Kazakhstan, Kyrgyzstan, Russia, Uzbekistan and Tajikistan, has held observer status at the UN since 2004.