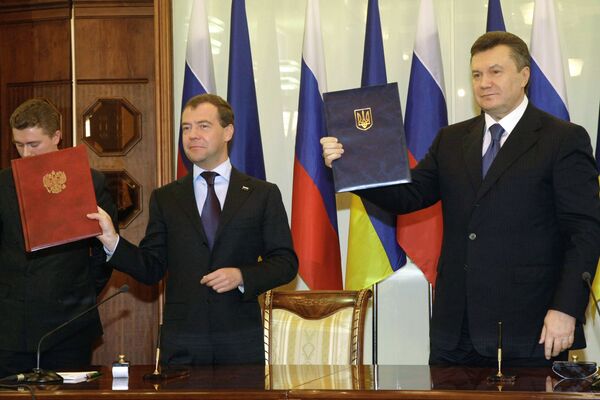 In a dramatic sign of improving ties, Moscow and Kiev on Wednesday agreed to extend the lease on a Russian naval base in the Crimea in exchange for a 30% cut in gas prices for Ukraine.

In a dramatic sign of improving ties, Moscow and Kiev on Wednesday agreed to extend the lease on a Russian naval base in the Crimea in exchange for a 30% cut in gas prices for Ukraine.

The lease agreement extends Russian naval presence in the port of Sevastopol for 25 years after the current lease expires in 2017, and may be further extended by another five years.

Medvedev stressed the importance of the base as key to regional security and vowed assistance in developing Sevastopol's socio-economic infrastructure in an effort to promote public relations and improve the Russian Navy's image.

"I will instruct the defense minister and the Black Sea Fleet commander to draft an agreement on the participation of our base in the socio-economic development of Sevastopol," Medvedev said.

Yanukovych has pledged to move Ukraine away from the pro-Western stance of former President Viktor Yushchenko, who vowed that Russia would have to look for a new main base for its Black Sea Fleet once the current deal expires in 2017.

The Ukrainian opposition, however, earlier said any prolongation of Russian military presence would require amendments to the Constitution as well as a national referendum.

Yushchenko's party said Yanukovych should be impeached for signing an agreement extending Russian naval presence in the Crimea because it contradicts the Ukrainian Constitution.

"A president, who has violated the norms of the Ukrainian Constitution...should be impeached," a statement published by Yushchenko's Our Ukraine party said on Wednesday.

"I want to draw attention to the fact that an article of the Ukrainian Constitution strictly forbids the creation and operation of any [foreign] military bases on Ukrainian territory not envisaged by law," she said.

In other developments, Boris Gryzlov, the speaker for the Russian parliament's lower house, the State Duma, said that the agreement on the Naval base might be simultaneously ratified by the Russian and Ukrainian parliaments next Tuesday.

He said that considering the importance of the issue, he immediately spoke with his Ukrainian counterpart Volodymyr Lytvyn.

"We have agreed that the Russian and Ukrainian members of parliament will use all efforts to ratify the agreement simultaneously. I believe that it might be on Tuesday. As for us [Russia] we are ready to consider this issue at tomorrow's session of the State Duma," Gryzlov said.

NATO spokesman James Apparthurai said Russia and Ukraine are both partners of the Western military alliance and the signing of the agreement on the base is an affair of bilateral nature.

"Discounts for Ukraine will come into effect from April this year," Yanukovych said.

Yanukovych, who was inaugurated in February, vowed during his campaign to improve relations with Russia and renegotiate the January 2009 deal on gas supplies, which increased the price Ukraine paid for Russian gas, straining the country's troubled finances.

Ukraine asked Russia to lower the gas price to $250 or at least $260 per 1,000 cu m, Russian business papers reported on Monday.