Moscow, Kiev may ratify deal on Russian Navy base on Tues. - Russian speaker 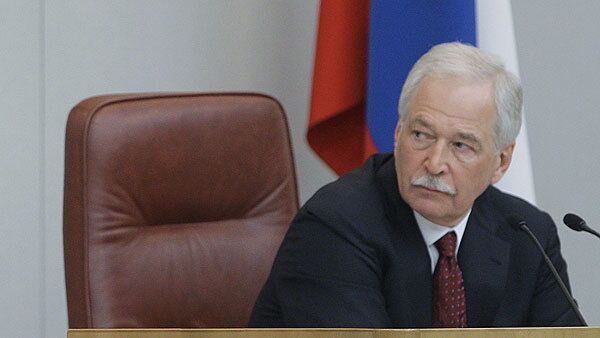 An agreement on the extension of the Russian Black Sea Fleet presence in Ukraine after 2017 might be simultaneously ratified by the Russian and Ukrainian parliaments next Tuesday, a Russian parliamentary speaker said.

An agreement on the extension of the Russian Black Sea Fleet presence in Ukraine after 2017 might be simultaneously ratified by the Russian and Ukrainian parliaments next Tuesday, a Russian parliamentary speaker said.

Russia and Ukraine on Wednesday signed an agreement extending Russian naval presence in the Crimea for 25 years after 2017, when the current lease is due to expire. The document was signed following negotiations between Russian President Dmitry Medvedev and his Ukrainian counterpart Viktor Yanukovych.

"The signing of the document by the presidents of Russia and Ukraine on the extension of the Black Sea Fleet presence in Ukraine is an event which undeniably has a significant meaning for the provision of strategic security and stability not only in the Black Sea region, but also in Europe as a whole," Boris Gryzlov, the speaker for the Russian parliament's lower house, the State Duma, said.

Under the new agreement, the lease on the Sevastopol base may be further extended by another five years after the current agreement expires in 2042.

Gryzlov said that considering the importance of the issue, he immediately spoke with his Ukrainian counterpart Volodymyr Lytvyn.

"We have agreed that the Russian and Ukrainian members of parliament will use all efforts to ratify the agreement simultaneously. I believe that it might be on Tuesday. As for us [Russia] we are ready to consider this issue at tomorrow's session of the State Duma," Gryzlov said.

Yanukovych has pledged to move Ukraine away from the pro-Western stance of former President Viktor Yushchenko, who vowed that Russia would have to look for a new main base for its Black Sea Fleet once the original deal expired in 2017.

The Ukrainian opposition, however, earlier said any prolongation of Russian military presence would require amendments to the Constitution as well as a national referendum.