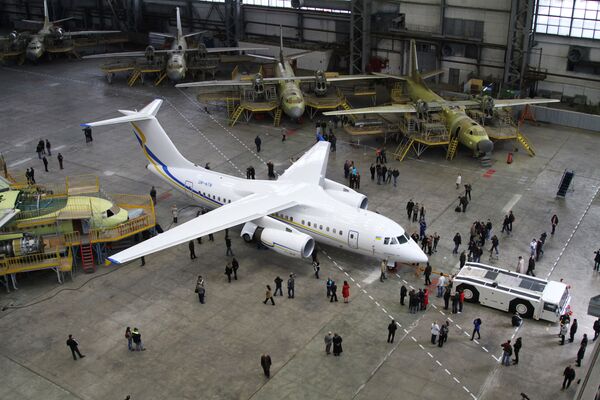 Russian business daily Vedomosti earlier reported that Russia had agreed to lower gas prices for Ukraine following a proposal from the country's new leader, Viktor Yanukovych. Sources close to the Ukrainian government told the paper, that they were expecting a 20-25% discount on the 2010 gas price, allowing the country to save over $3 billion a year.

The deal could be signed during a meeting between Russian and Ukrainian presidents later on Wednesday in the east Ukrainian city of Kharkov.

Ukrainska Pravda on Tuesday cited the Russian version of a draft agreement as saying that Russia's United Aircraft Corporation (UAC) will receive a 50%+1 stake in Antonov in exchange for a gas discount under the deal.

Ukraine will receive a stake in UAC, but its size will be determined after an independent evaluation of the market values of Antonov and UAC. The deadline for the final decision is August 1, 2010.

Russian official sources did not comment on the report.

Ukraine was prepared to give Russian companies access to the privatization of the Ukrainian aviation industry and energy sector in 2006, during Yanukovych's second term as prime minister. The deal was not completed before Yanukovych lost his post.

Last Friday, the Russian and Ukrainian governments approved new gas agreements reached by Russian gas monopoly Gazprom and its Ukrainian partners. The details of the deal have not been disclosed.

During his election campaign, Yanukovych vowed to improve relations with Russia and renegotiate the January 2009 deal on gas supplies, which increased the price Ukraine paid for Russian gas, straining the country's troubled finances.