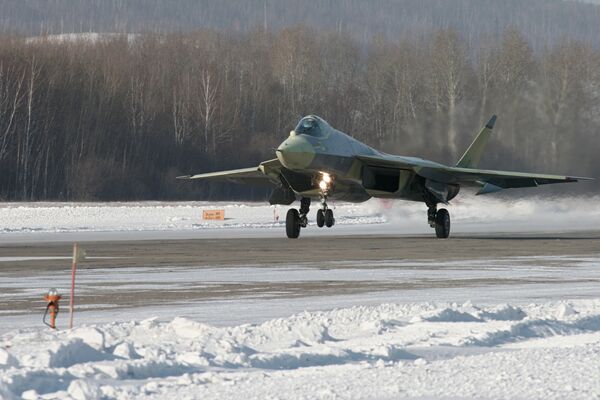 Russian Prime Minister Vladimir Putin said he was satisfied with the tests of a Russian fifth-generation fighter jet.

Russian Prime Minister Vladimir Putin said he was satisfied with the tests of a Russian fifth-generation fighter jet.

"Once again I want to thank everyone who worked on this machine, as well as those who are now putting it in the air," the premier continued.

The first Russian fifth-generation fighter jet was delivered to Zhukovsky in the Moscow Region for a flight test on April 8.

The fighter performed its maiden flight on January 29, when the jet spent 47 minutes in the air.

The Sukhoi design bureau started project development of the aircraft after it received the tender in April 2002. Last summer, the fighter's design was approved, and the prototype blueprints were delivered to the KNAAPO aviation construction company based in Komsomolsk-on-Amur.

The T-50 is the domestic name of the plane which had been developed as the Advanced Front-Line Aviation Complex (PAK FA) for Russia's Air Force. The PAK FA can carry either eight next-generation air-to-air R-77 missiles, or two large controllable anti-ship bombs weighing 1,500 kg each. It can also carry two long-range missiles developed by the Novator Bureau which can hit targets within a 400 kilometer range.