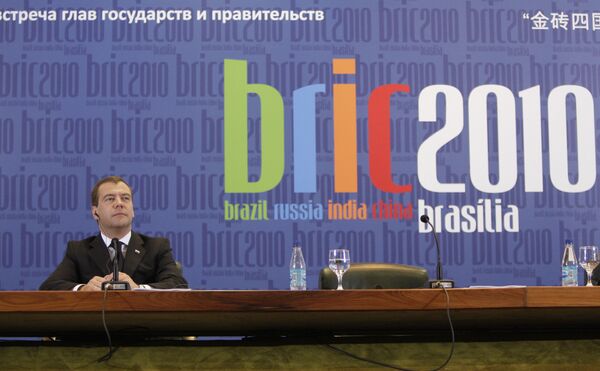 Russian President Dmitry Medvedev said on Friday the country will pull out of the Kyoto environmental agreement if a compromise cannot be found concerning the reduction of carbon emissions.

Russian President Dmitry Medvedev said on Friday the country will pull out of the Kyoto environmental agreement if a compromise cannot be found concerning the reduction of carbon emissions.

"All countries, including developed and developing economies, should reach an agreement, or, if we do not agree on this [the common terms of carbon emissions reduction], Russia will not prolong its participation in the Kyoto agreement - you cannot have it both ways," the president said.

The statement came after the BRIC summit in Brazil's capital, Brasilia. The top-level talks, bringing together the leaders of Brazil, Russia, India, and China, were aimed at improving the current global economic situation and strengthen cooperation between the four countries.

The Kyoto Protocol is a legally binding agreement restricting carbon emissions, some points of which expire in 2012. A new global climate deal is needed to continue efforts beyond 2012.

The controversial UN climate summit, which took place in the Danish capital, Copenhagen, in December 2009, was originally expected to see the signing of a new agreement to replace the Kyoto Protocol, but countries only agreed to try to keep average increases in global temperatures below 2 degrees Celsius.

India, China and other emerging economies have not undertaken any obligations concerning the reduction of carbon emissions. The United States said it would not participate in the agreement until at least 2013. The county considers that climate change should be tackled by modern technologies, not cuts in carbon emissions stipulated by the Kyoto Protocol.

Medvedev earlier said that while the 2009 Copenhagen Summit was a disappointment, Russia was determined to push forward strategies to reduce greenhouse gas emissions, saying the country could then meet its target of a 25% cut by 2020.

Medvedev signed Russia's climate doctrine in the midst of the summit. The document requires the government to integrate various programs aimed at tackling climate changes caused by man into the doctrine implementation.

Medvedev also spoke of the need for a global climate agreement, but one that would "answer the interests of Russia's sustainable development." This, he said, would need a strong coordinated effort from all branches of Russia's government.