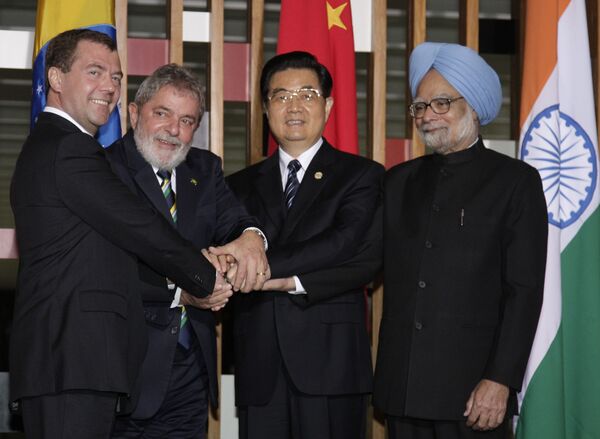 The leaders of the four leading emerging powers have gathered in the Brazilian capital to discuss ways to improve of the current global economic and political situation and strengthen their cooperation.

"The BRIC format is becoming fully-developed. It allows us not only to coordinate our efforts but also to make concrete decisions," Medvedev told a news conference after the summit.

Medvedev said that although the summit had been scaled back due to a devastating earthquake in China, which forced Chinese President Hu Jintao to go home earlier than planned, the leaders managed to discuss a wide range of political and economic issues on the global agenda.

In a six-page joint statement, the four increasingly influential countries praised the key role of the G20 group of leading world economies in efforts to overcome the global financial crisis and urged a broader use of local currencies in global and regional trade.

The document also includes the BRIC group's consolidated position on energy security, climate changes and the fight against terrorism.

The countries agreed to hold the next BRIC summit in China in 2011.