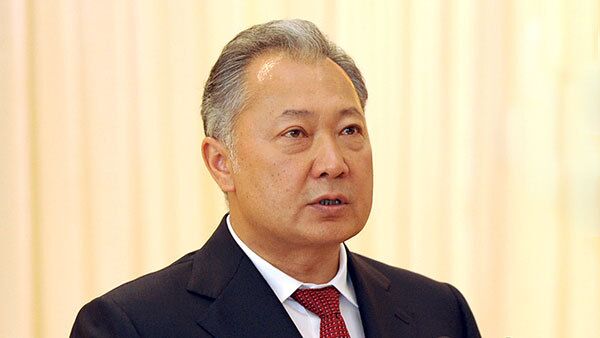 "A military plane with president Kurmanbek Bakiev on board landed in Taraz [in South Kazakhstan]. I don't know where he will fly from there or what meetings he has planned," Ilias Omarov said.

A statement on the website of the Organization of Security and Cooperation in Europe (OSCE) said the decision to bring Bakiev to Kyrgyzstan had been supported by Kazakh President Nursultana Nazarbaeva, U.S. President Barack Obama, Russian President Dimitry Medvedev and the OSCE.

"The event is an important step towards stabilizing the situation, returning the rule of law and preventing civil war in Kyrgyzstan," the statement said.

Earlier in the day, Bakiyev told some 500 of his supporters, who gathered near his family home in Jalal-Abad, that Nazarbayev had invited him for discussions on how to resolve the current situation in Kyrgyzstan.

"I will go there [to Kazakhstan] and express my opinion. Let them listen to me; let heads be turned. My opinion isn't given anywhere," he told his supporters.

Last week Kazakhstan, which holds the rotating chair of the OSCE, barred its residents from visiting Kyrgyzstan and increased security on the border between the two countries.

Bakiyev fled the Kyrgyz capital, Bishkek, to take refuge in his home village in the south of the country when violent unrest broke out on April 7, leaving at least 80 dead and more than 1,500 injured.

He refused to hand over power to the self-declared interim government unless he is guaranteed safety and amnesty for himself and his relatives.

Interim leader Roza Otunbayeva has not ruled out criminal charges against Bakiyev for the bloody unrest in the country.