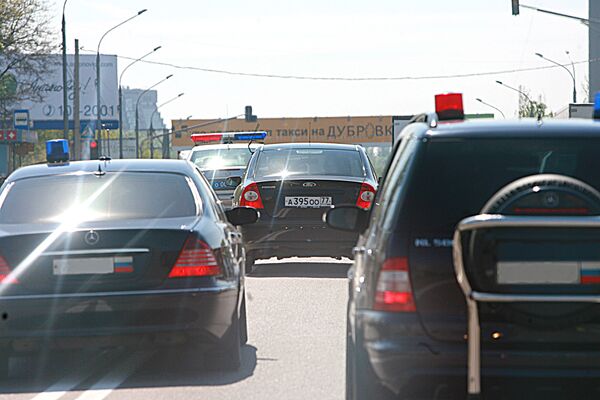 Drivers in Russia are being asked to protest officials' flouting of traffic laws by honking when they see cars with flashing lights using opposing lanes to avoid jams or run red lights, a Russian newspaper said on Thursday.

It is common in Russia to see cars with a flashing blue light on the roof speeding past lines of cars, particularly on the famously snarled streets of the capital, and they are accused of violating traffic rules, causing jams and threatening other road users' safety.

"We call on motorists to honk when they see the cars with a flashing light driving in a lane against the direction of traffic," Kommersant quoted a leader of the federation's Moscow branch, Sergei Kanaev, as saying.

Black imported executive-class sedans with flashing blue lights and sometimes sirens or horns have become objects of hate for millions of drivers in Moscow, who spend hours sitting in traffic jams watching the rich and powerful speed past.

The issue resurfaced again in February after the chauffeur-driven Mercedes of an senior oil company executive collided with a small Citroen, killing renowned gynecologist Vera Sidelnikova and another woman doctor. The traffic police said the driver of the Citroen was at fault, but the family of the two women rejected that version of events and public outrage sparked protests outside LUKoil's headquarters.

Kanaev said the federation was sending an open letter to the prime minister and president demanding that flashing lights ne banned on vehicles without emergency service signs.

"The real number of special car signals exceeds the one that was established by the government," Kommersant quoted a leader of car owners union Freedom of Choice as saying. Vyacheslav Lysakov said officials get the additional lights from the traffic police or local administration.

Luzhkov told Kommersant that only three people in Russia should have the right to use the flashing lights - the president, prime minister and patriarch. "The flashing lights should be taken away from the rest of the officials," the daily quoted Luzhkov as saying.

The Moscow mayor said the number of non-emergency vehicles with flashing lights in Russia was so much greater than for the rest of Europe so it was only natural that people would protest.