Belarus has "hundreds of kilograms" of weapons-grade uranium — Lukashenko 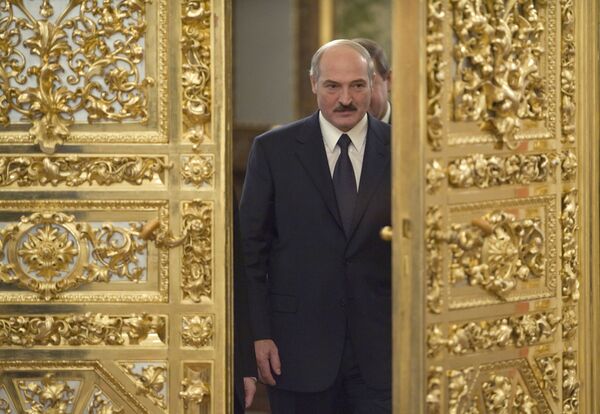 © RIA Novosti . Sergey Guneev
/
Go to the photo bank
Subscribe
Belarus possesses hundreds of kilograms of highly enriched uranium and is not going to get rid of it.

Belarus possesses hundreds of kilograms of highly enriched uranium and is not going to get rid of it, the country's Belta news agency quoted Belarusian President Alexander Lukashenko as saying.

The statement came after the 47-nation nuclear security summit, hosted in Washington by U.S. President Barack Obama on April12-13. Belarus was not invited to participate in the top-level meeting, during which world leaders agreed, according to their communique, to "join Obama's call to secure all vulnerable nuclear material in four years" to "enhance nuclear security."

"We still have highly enriched uranium. Hundreds of kilograms of... weapons-grade [at least 90%-enriched] and less-enriched uranium," the Belarusian strongman said.

Only some 25 kilograms (55 pounds) of highly enriched uranium is needed to create a nuclear bomb that can devastate an entire city.

Lukashenko said he had been urged to dispose of the fuel for years, adding the issue has been especially acute as of late.

However, the Belarusian leader said, it would not benefit the country if he decided to export the fuel, adding Belarus's decision to get rid of its nuclear weapons following the collapse of the Soviet Union was a "severe mistake."

Stanislav Shushkevich, the first president of the independent Belarusian state, signed an agreement to hand over all nuclear weapons to Russia in 1994, declaring Belarus a nuclear-free state in exchange for security guarantees from the world's nuclear powers.

Lukashenko said he was forced to fulfill the agreement in 1996 as "Russia and the Americans were pressing me", adding the weapons should have rather been sold.

The Belarusian leader said his country was not going to use its highly enriched uranium to produce nuclear weapons.

"I say: first, why do you dictate us [what to do]? This is our product, we are keeping it under control of the IAEA. We are not going to produce dirty bombs or sell them to anyone. We use this uranium for research purposes," Belta quoted Lukashenko as saying.

The Belarusian president called on the world's nuclear powers to discuss the issue together.

"Let us sit at the negotiation table and decide what to do with this big amount of enriched uranium," Lukashenko said.

"Nobody will be allowed to make Belarus bow down," he said.

During the nuclear security summit in Washington, another former Soviet republic, Ukraine, agreed to dispose of all its highly enriched uranium stockpiles by 2012. Obama met the decision by Ukraine, which was heavily hit by the 1986 Chernobyl disaster, with enthusiasm.

Russia has said it is planning to import fresh highly enriched uranium from Ukraine as well as from Belarus and the Czech Republic, this year. The country also plans to import spent nuclear fuel from Ukraine, Poland, Germany, Serbia, and Belarus.