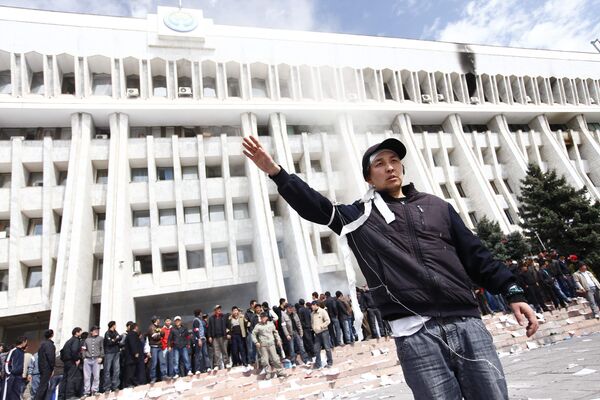 © RIA Novosti . Andrei Stenin
/
Go to the photo bank
Subscribe
The interim government of Kyrgyzstan, which came to power during last week's riots, was boosted on Wednesday with offers of support from Russia and the United States.

The interim government of Kyrgyzstan, which came to power during last week's riots, was boosted on Wednesday with offers of support from Russia and the United States.

The pledges represent the strongest backing yet for the new authorities in the former Soviet Central Asian country, which Russian President Dmitry Medvedev warned was on the verge of civil war after the unrest that left more than 80 people dead and 1,500 injured.

President Kurmanbek Bakiyev fled the capital at the height of the violence and has taken refuge in his home village in the south of the country. The interim government on Wednesday suggested that a negotiated resolution to the standoff could be found, but refused to rule out criminal proceedings against the ousted president.

Blake said after talks with interim Prime Minister Roza Otunbayeva that he was "optimistic" about the measures being taken by the provisional government. He added that Washington considered human rights and civil freedoms priority issues in the former Soviet republic.

Otunbayeva said U.S. financial aid was discussed at the talks.

"We have to provide farmers with seeds and fuel," she said. "We ask for economic aid to be sent direct to our ministries. On our part we guarantee openness, democracy and transparency."

Moscow also declared its readiness to provide aid to the impoverished Central Asian republic, which urgently needs funds and fuel to return life to normal.

Finance Minister Alexei Kudrin said Russia would give Kyrgyzstan a $20 million grant and a $30 million concessional loan to help stabilize the economic situation.

Prime Minister Vladimir Putin instructed the government to prepare corresponding resolutions to provide assistance to Kyrgyzstan by the end of this week. He also said Russia could increase financial aid to Kyrgyzstan if necessary.

Deputy Prime Minister Igor Sechin said Russia could send up to 25,000 metric tons of petroleum products to Kyrgyzstan to help it with its spring sowing campaign.

The offers came after Medvedev said late on Tuesday during a visit to the Brookings Institute, a leading U.S. think tank, that Russia's task was "to help [our] Kyrgyz partners find the most peaceful way of overcoming this situation" to avoid creating "a second Afghanistan."

There has been practically no dialogue between the interim government and the deposed president, but Otunbayeva said steps were being taken to improve the situation.

"Representatives from the UN, the OSCE and other international organizations are here; they are trying to fix this problem," Otunbayeva said.

She said the interim government is considering all options, including Bakiyev's resignation and his leaving the country. She stressed that if the new authorities catch Bakiyev, he will definitely face trial.

"Bakiyev says that he and his relatives need guaranteed security. People are saying that he has gone beyond the boundaries of his immunity and should face a trial," Otunbayeva said, although she did not rule out talks with the ousted president.

Bakiyev said on Tuesday he would resign if the interim government guarantees his and his family's security and order in the country. He has refused to return to Bishkek.

The interim government has taken away Bakiyev's immunity from prosecution, enabling the authorities to issue a warrant for his arrest.

The first round of mediated talks with Bakiyev was conducted by Tolekan Ismailova, a member of an independent public commission to investigate the April 6-8 riots. She said the deposed leader "understands that he is not the president anymore."

A former lawmaker and a member of Bakiyev's party Ak Zhol, which overwhelmingly dominated the parliament dismissed last week, said lawmakers could help to bring the political tensions back to the legal realm "by impeaching Bakiyev."