Medvedev pledges to find and punish killers of Russian judge 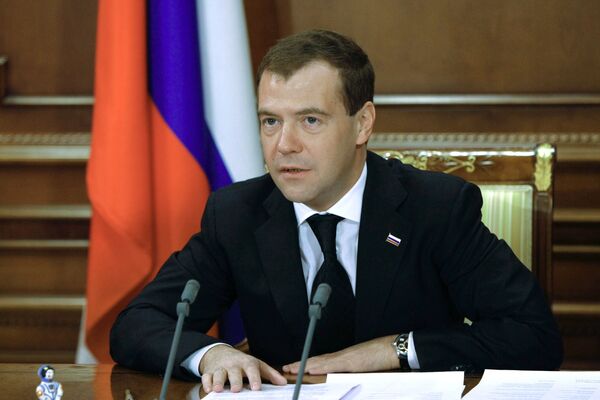 © RIA Novosti . Vladimir Rodionov
/
Go to the photo bank
Subscribe
Russian President Dmitry Medvedev pledged on Monday to take all efforts to find and punish those involved in the killing of a Moscow judge earlier in the day.

Russian President Dmitry Medvedev pledged on Monday to take all efforts to find and punish those involved in the killing of a Moscow judge earlier in the day.

Eduard Chuvashov, 47, died in the stairwell of an apartment block from bullet wounds to the chest and head. The killer fled the scene immediately after the attack at 8:50 a.m. Moscow time (04:50 GMT).

"Everything that is necessary will be done so that the organizers and performers of this cynical killing are found and punished," the Russian president said in a message to the head of the Moscow City Court, Olga Yegorova.

A criminal case into the murder and illegal possession of firearms has been opened. The Russian Investigative Committee said the incident was thought to be linked to the judge's professional activities, although a motive for the crime had not been established.

Medvedev said Chuvashov "was respected... as a competent lawyer in the legal community, who honestly served the law, performed his duties with responsibility and adherence to principles."

The Moscow City Court's website states that on Monday Chuvashov was supposed to be looking into the case of Vladimir Belashev, a former member of the Interior Ministry department in charge of fighting organized crime, who was accused of taking part in the bombings of two statues near Moscow.

Belashev was arrested in April 1998, and was sentenced to 11 years imprisonment for terrorism. In 2008, an EU court in Strasbourg ordered Russia pay 10,000 euros ($13,612) in compensation to Belashev after he complained that he had spent five years waiting sentencing.