A new page in Russian-Polish relations after a dark epilogue 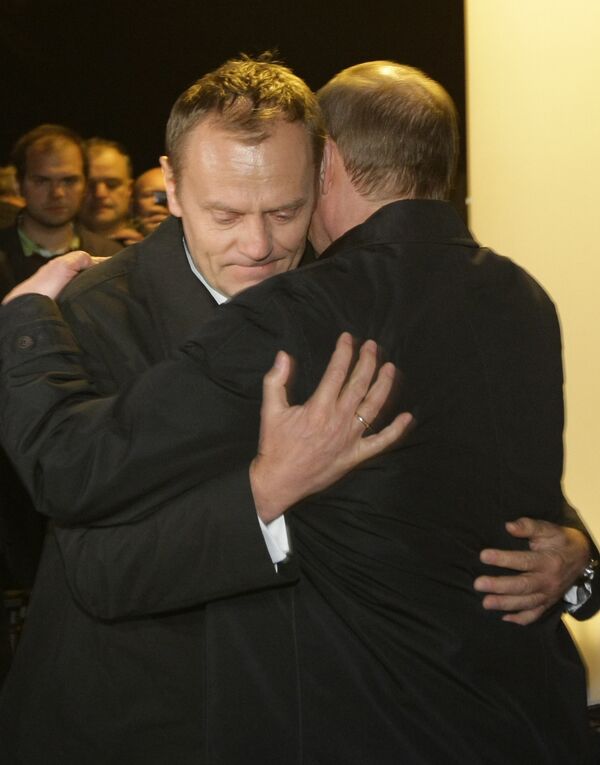 The Tupolev Tu-154 airliner carrying Polish President Lech Kaczynski and a national delegation was not recommended to land either. When the Tu-154 was still flying through Belarusian air space, local air traffic controllers advised that President Kaczynski's plane land in Minsk, due to bad weather conditions, writes the paper's Moscow correspondent Waclaw Radziwinowicz. "But the pilots could not disobey their President", writes Radziwinowicz.

The circumstances of the crash are not completely clear and will long remain the subject of rumors, conjectures and conspiracy theories. The disaster has killed 88 people, including virtually all members of the Polish presidential administration and the commanders of all armed service branches.

Many of the deceased had worked hard to improve Russian-Polish relations. Hopefully, the tragedy will also lead to closer relations following a stream of sincere condolences from Russian politicians. "It's terrible that Katyn has claimed new victims," said Konstantin Kosachyov, chairman of the State Duma's committee on foreign affairs, expressing the feelings of all Russian people.

But if the theory of Polish journalists is true, and if the late President Kaczynski had turned down the suggestion to land in Minsk or a Russian city, then this tragedy highlights conceit and political ambitions as a major problem in our relations.

By demanding that his plane land in Smolensk, rather than Minsk, Kaczynski probably did not want to take advantage of Belarusian President Alexander Lukashenko's hospitality because he had frequently criticized Lukashenko for his undemocratic behavior and pandering to Moscow's imperial ambitions.

Kaczynski had promised never to go to Moscow even before he was elected president in 2005. As a candidate of the conservative political party Law and Justice headed by him and his brother Jaroslaw Kaczynski, he said he would not go to Moscow unless his Russian counterpart "returned" several visits of his predecessor Aleksander Kwasniewski.

Putin had time to "return" just one visit in 2002 before Russian-Polish relations were soured by the 2004-2005 Ukrainian Orange Revolution.

Kaczynski had always positioned himself as a devout Christian. The Polish word Pokora denotes humility, one of the main Christian virtues. Many Russian and Polish leaders lack humility today for taking bilateral relations onto solid ground.

Numerous attempts have been made to normalize Russian-Polish relations. In 1989-1991, both countries finally rid themselves of totalitarian Communist rule. At that time, we didn't feel like exchange tourist travels, as both nations struggled for survival. In an effort to cut down on spending, the new Polish President Lech Walesa cancelled Russian-language classes at national schools.

There was another glimmer of hope in 1999-2004 after Poland joined NATO and the European Union. At that time, many hoped that Warsaw would feel completely safe from Moscow and would extend a friendly hand to it. But all hopes were dashed after Ukrainian President Viktor Yushchenko and Prime Minister Yulia Tymoshenko began to preach Orange Revolution values which were also picked up by Polish politicians.

The Polish word Gonor means "honor." Lech Kaczynski had repeatedly displayed this trait, while being one of the leaders of the underground Solidarity movement in the 1980s. A forceful and uncompromising personality, Kaczynski had quarreled with Solidarity leader Walesa, his former rightist ally Donald Tusk and a former colleague at the Workers' Defense Committee and Gazeta Wyborcza editor Adam Michnik.

Nor did Kaczynski compromise in squaring accounts with the Communist past. Institute of National Remembrance President Janusz Kurtyka, who also died in the crash, gained fame for his tough verdicts passed on former security service agents of the pro-Soviet People's Republic of Poland.

Even such anti-Communists as Walesa and Michnik believed that the methods of Kaczynski and Kurtyka were too harsh. Nonetheless, Kaczynski was determined to drag Poland by its hair from Ubekistan, a reference to the initials of Urzad Bezpieczenstwa (UB), the Communist-era Public Security Office. And he accomplished this objective.

But new times require new approaches. Bronislaw Komorowski, the Acting President of Poland and Speaker of the Sejm (Parliament), will probably display such approaches. Under the Polish Constitution, Komorowski has to set the date of presidential elections by June 20. The final deadline for setting the election date is April 24. As a candidate of Civic Platform, a liberal conservative political party, Komorowski has the greatest chances of victory.

A dissident and a critic of Russian leaders, Komorowski has displayed a realistic stance in the past few years, while those Sejm members displaying the least tractability with regard to Russia have recently lost their positions. The Sejm, rather than the President, is the traditionally central element of the Polish political system. So, let's hope that, unlike the 1990s and the 2000s, Russia and Poland will now establish more successful relations.