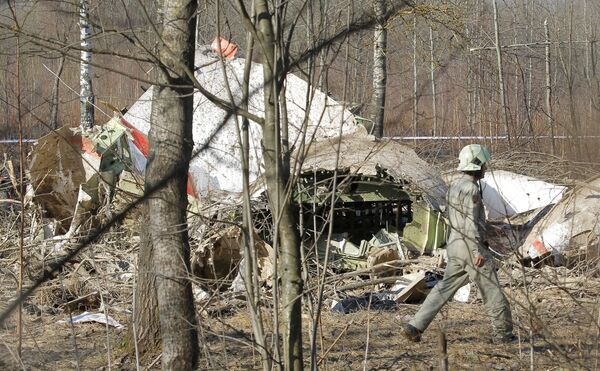 As investigators work to identify the cause of an air crash near the Russian city of Smolensk on Saturday, in which Polish President Lech Kaczynski, his wife, and 94 top officials died, speculations about the issue remain a hot topic among Western experts.

As investigators work to identify the cause of an air crash near the Russian city of Smolensk on Saturday, in which Polish President Lech Kaczynski, his wife, and 94 top officials died, speculations about the issue remain a hot topic among Western experts.

Some experts suggest that the age of the presidential three-engine Tu-154, built in 1984, was to blame.

The New York Times cited Paul Hayes, director of accidents and insurance at London-based aviation consultancy Ascend, as saying Russia halted mass production of the jet about 20 years ago and about 200 of them are still in service around the world. He said the Polish presidential model was one of the youngest of those still in service.

Polish media said former Polish Prime Minister Leszek Miller, who survived a helicopter crash in 2003, had long predicted such a disaster. Polish officials requested the replacement of the government's aging air fleet but were told there were not enough funds.

James Fallows, a National Correspondent for American magazine The Atlantic said "initial worried speculation about the 'aging' Russian Tupolev-154 aircraft was probably beside the point."

Polish TV quoted Alexei Gusev, the head of the maintenance plant in the Russian Volga city of Samara that recently carried out major overhaul work on the airplane, as saying that the presidential Tu-154 was safe.

"From the moment it entered service, the plane had had 5,004 flight hours and 1,823 landings, which, for an aircraft of this class, is not a lot," he said.

The BBC News web site quotes a review of a Tu-154 written in 2004 by expert in Russian aviation Paul Duffy. He said that only a few of the 28 planes lost in accidents up to that date had crashed because of technical failure.

"The Tu-154 operates in regions with not very good air traffic control and navigation equipment, and in very difficult weather conditions," Duffy said, adding that some of the accidents had little relation to the aircraft itself.

Fallows said in The Atlantic Magazine that initial reports that the Smolensk field in Russia was covered with heavy fog at the time of the crash could point at bad weather as the villain.

Aviation expert, Tomash Shultz, said in an interview with TBN-24 TV-channel that the crash was the pilot's fault.

"There was a problem with the pilot, who under usual circumstances would have refused to land the plane; however, this time he tried to land it three or four times, and this was an emergency situation," Shultz said, adding the pilot was under pressure to land the plane because Polish officials were on board.

The New York Times said the investigators are to look into why the pilot did not heed instructions from air traffic controllers to give up trying to land in bad weather and whether he felt under pressure to land to make sure that the Polish delegation would not be late for the Katyn ceremony.

The paper said Kaczynski had got into a dispute in August 2008 with a pilot flying his plane to the Georgian capital of Tbilisi, during Russia's brief war with Georgia, demanding that the pilot land despite dangerous conditions. However, the pilot disobeyed the order and landed in the neighboring Azerbaijani capital of Baku.

"If someone decides to become a pilot, he shouldn't have any fears," Kaczynski said. "We'll deal with this matter when we return."

In the end the pilot received a medal for his services instead of punishment.

British newspaper the Guardian quoted the former Polish president Lech Walesa as saying that it was too early to state the cause for sure, but the pilot could have been pressured by the Polish president and his delegation to land.

"Sometimes the plane captain would make the decision himself, even against the recommendations," Walesa told the newspaper Gazeta Wyborcza.

A number of conspiracy theories have already been conjured up in attempts to explain the disaster.

British newspaper The Daily Mail quoted Edward Lucas, a leading expert on East European affairs, as saying that although there is no evidence that the crash was caused by sabotage, many Poles will think foul play was involved because of the historical parallels.

Kaczynski was flying to Smolensk to take part in memorial ceremonies to mark the 70th anniversary of the massacre of thousands of Polish officers by the by Soviet secret police in the World War II in Katyn forest near Smolensk. It remains one of the most painful historical events for the Polish people.