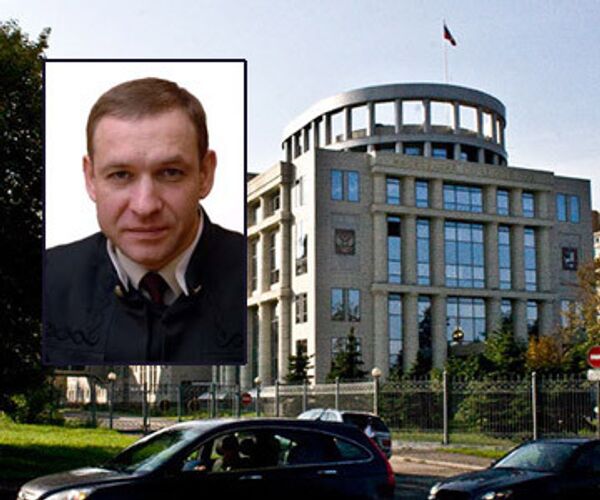 A Russian federal judge shot dead in Moscow on Monday morning was probably killed over his professional activities, investigators said.

Eduard Chuvashov, 47, died in the stairwell of an apartment block from bullet wounds to the chest and head. The killer fled the scene immediately after the attack at 08:50 Moscow time (04:50 GMT).

A criminal case into murder and illegal possession of firearms has been opened. The Russian Investigative Committee said the incident was thought to be linked to the judge's professional activities, although a motive for the crime had not been established.

Experts were working at the scene and the gunman was being sought based on an eyewitness description.

The Moscow City Court's website states that Chuvashov was on Monday meant to be looking into the case of Vladimir Belashev, a former member of the Interior Ministry department in charge of fighting organized crime, who was accused of taking part in the bombings of two statues near Moscow.

Belashev was arrested in April 1998 and was sentenced to 11 years imprisonment for terrorism offenses. In 2008, an EU court in Strasbourg ordered Russia pay 10,000 euros ($13,612) in compensation to Belashev after he complained that he had spent five years awaiting sentencing.

In February, he heard the trial of the "White Wolves" skinhead group, sentencing nine gang members to up to 23 years in prison. The group was responsible for 11 brutal murders. They filmed their attacks on cell phones and uploaded the footage onto ultranationalist websites.

He also worked on the case of Federal Drug Control Service officer Alexander Bulbov, who was accused of embezzling $3.2 million, illegal phone tapping, money laundering and offering bribes. He was released on bail in November 2009 after 25 months in pre-trial detention.

At the time of his arrest, Bulbov and his colleagues had been investigating a high-profile furniture smuggling case, which resulted in the arrests of five senior FSB officers. The arrest prompted speculation over a possible conflict between the two state agencies.