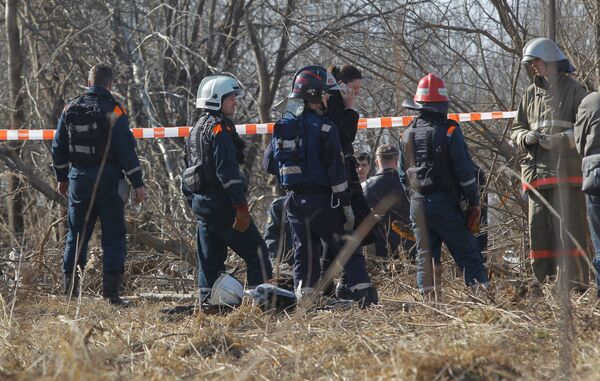 © RIA Novosti . Ilya Pitalev
/
Go to the photo bank
Subscribe
Russian and Polish investigators will continue on Monday the search for the remains of those killed in the Polish president's plane crash on Saturday.

Russian and Polish investigators will continue on Monday the search for the remains of those killed in the Polish president's plane crash on Saturday, a Russian police source said.

The Soviet-made TU-154 carrying President Lech Kaczynski hit the top of trees as it attempted to land at a Smolensk airport in the west of Russia in thick fog on Saturday morning, killing all 96 people on board the plane.

"The investigators will resume the work at the site of the crash  at 09.00 Moscow time [05.00 GMT]. They will search for the remains of the victims that could be scattered around the site or buried in the ground rather than in the wreckage of the plane," the source said.

The official said that the investigators and rescue workers discovered several body parts at the site on Sunday after most of the remains had been removed from the wreckage and sent to Moscow.

"A more thorough search should be carried out at the site," he said.

According to investigators, the crash was so strong that the plane burst into small pieces with only a few relatively large parts remaining.

Polish Health Minister Ewa Kopacz, who is currently in Moscow, said earlier that only 14 bodies of the victims could be easily identified by relatives.

Another 20 bodies have been identified by forensic experts but DNA testing will be necessary to confirm the identity of the rest of the victims, she said.

The body of Lech Kaczynski has been identified and flown to Warsaw where it will lie in state for several days until the burial.

The Polish government has announced that there will be public access to Kaczynski's coffin at the presidential palace in Warsaw on Tuesday.