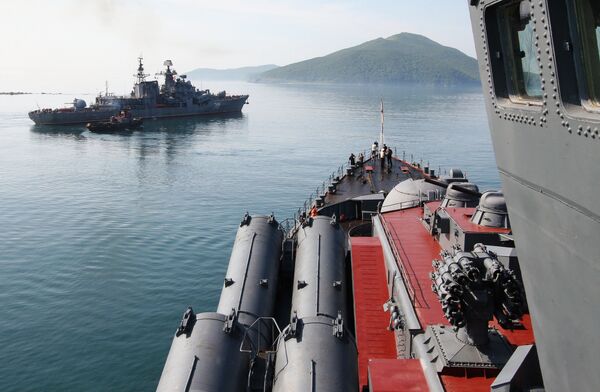 The Moskva missile cruiser will set sail on Friday on a long-range tour of duty, which will culminate with exercises in the Indian Ocean

The Moskva missile cruiser will set sail on Friday on a long-range tour of duty, which will culminate with exercises in the Indian Ocean, a Navy official said.

The flagship of the Black Sea Fleet will join other Russian warships in the region, including the Pyotr Veliky nuclear-powered missile cruiser, which left Russia's Northern Fleet headquarters of Severomorsk on March 31.

"During the tour of duty, the Moskva cruiser will cross the Mediterranean, pass through the Suez Canal and conduct joint exercises with warships from other Russian fleets, including from the Northern Fleet, in the Indian Ocean," a spokesman for the Black Sea Fleet said.

The cruiser, which has a compliment of naval infantry on board, will also make several port calls in the Indian Ocean.

The Moskva is a Slava-class missile cruiser designed as a surface strike ship with some anti-aircraft and ASW capability.

The ship has 16 SS-N-12 Sandbox supersonic anti-ship missiles, mounted in four pairs on each side.

Russia announced in 2007 that it was building up its naval presence in the world's oceans. Once one the world's most powerful navies, Russia now has few ships regularly deployed.

A Russian Pacific Fleet task force, comprising an Udaloy class missile destroyer, Marshal Shaposhnikov, a salvage tug and a tanker, is currently on an anti-piracy mission off the Somali coast.