Bakiyev: Falling into the same trap 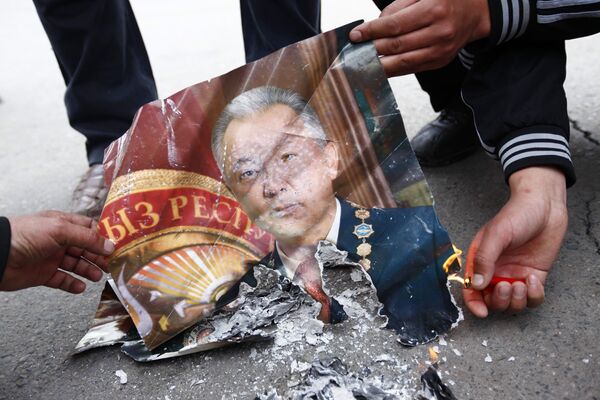 © RIA Novosti . Andrei Stenin
/
Go to the mediabank
Subscribe
International
India
Africa
The rapid downfall of Kyrgyz President Kurmanbek Bakiyev came as a surprise for political analysts. Only four days previously he met with UN Secretary General Ban Ki-Moon in Bishkek. Not a single analytical centre in Russia or the West predicted such a rapid turn of events.

The rapid downfall of Kyrgyz President Kurmanbek Bakiyev came as a surprise for political analysts. Only four days previously he met with UN Secretary General Ban Ki-Moon in Bishkek. Not a single analytical centre in Russia or the West predicted such a rapid turn of events.

Nor did anyone predict the Tulip Revolution of March 24, 2005, when Bakiyev's predecessor, Askar Akayev, was removed from power. Why does Kyrgyz politics experience such radical changes?

This unrest in Kyrgyzstan was hardly provoked by outside forces. Both Russia and the United States, which have military bases there, are interested in the stability of the Kyrgyz regime. Foreign criticism of Bakiyev was subdued, emanating only from international organizations. During his recent visit, Mr Ban merely reminded Bakiyev that "media independence, tolerance for ethnic and religious diversity and a robust civil society are all fundamental to modernization." To sum up, the new revolution had domestic causes. The tranquility that seemed to have settled in Kyrgyzstan in the recent years of Bakiyev's five-year rule proved deceptive. What were his main mistakes?

Akayev, who lost power in similar circumstances five years ago, was often accused of weakness and failing to use sufficiently tough measures to suppress rioters. Bakiyev's fate shows that, in Kyrgyzstan, even the toughest measures cannot help a president condemned by his people. Akayev used private security guards against the indignant crowds but Bakiyev's task force fired at the crowds several times on April 7. This April, 75 people were killed but the bullets neither prevented nor even delayed the collapse of the regime. As in 2005, the regime collapsed in one day. Nor were pre-emptive arrests any help. Quite the contrary, the arrest of Bolot Sherniyazov, an opposition leader of average importance, in the provincial city of Talas triggered the uprising. Hence, lack of resolve did not play a role here. Bakiyev's mistakes lay elsewhere.

Russian Prime Minister Vladimir Putin said that Bakiyev fell into the same trap by allowing nepotism in the economy and government. Clearly, the fact that the President's son, 32-year-old Maxim Bakiyev, was appointed head of the Central Agency for Development, Investment and Innovation, did little to boost the head of state's popularity. What really roused the public's ire, however, was the appointment of the President's younger brother, Zhanysh Bakiyev, as head of his Security Service.

What real influence did these people exert on the country's economy and politics? Maybe, it was not as great as the leaders of the victorious opposition portray it to be. But by keeping a low profile (Maxim Bakiyev has only ever given a handful of interviews) and refusing to release official, verified information about the president's property, the regime allowed the opposition to demonize Maxim and Zhanysh. Now it is no longer important whether or not those charges against them were justified. It is the result that matters.

Instead of airing all these issues in open debate, the government decided to restrict public access to the media. Discontent has been building since the middle of March when access to the independent sites Fergana.ru and Centrazia.ru was limited. The usual BBC evening broadcast disappeared from the government television network at the same time. As a result, rumors began to mount.

The regime also blocked their recourse to parliament, an important channel for expressing public discontent. In 2007, Bakiyev announced his intention to establish a ruling party in the republic. At the elections on December 16, 2007, this ruling party, Ak Zhol, took 74 mandates out of 90, but, as it now transpires, not without the help from the election commissions. The remaining 16 votes were split by the communists and social democrats (the Kyrgyz counterparts of the Russian Communist Party and A Just Russia). The popular Ata-Meken party led by former Speaker Omurbek Tekebayev did not receive a single vote.

Unable to find any release in legal political struggle, discontent accumulated like powder in a powder keg. Little surprise, then, that it reached a critical mass and exploded.

Now Tekebayev has become one of the deputy prime ministers in the interim government, which has dismissed parliament. According to opposition sources, the president flew to the city of Dzhalal-Abad, where he is trying "to organize resistance."