Kyrgyz president goes into hiding, refuses to step down (WRAPUP 5) 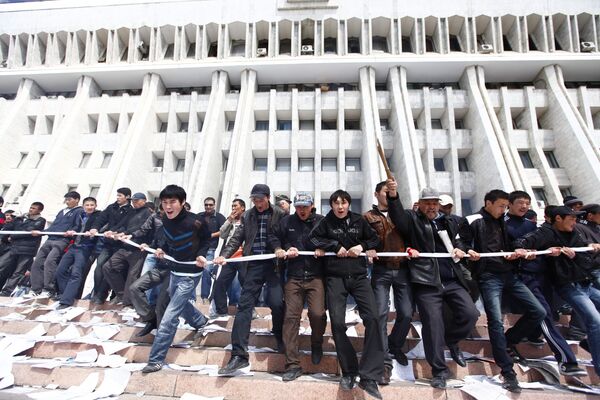 © RIA Novosti . Andrey Stenin
/
Go to the photo bank
Subscribe
Kyrgyz President Kurmanbek Bakiyev, who fled the capital Bishkek amid violent opposition protests, said on Thursday he no longer has any real power but vowed not to resign, local news agency 24.kg reported.

Kyrgyz President Kurmanbek Bakiyev, who fled the capital Bishkek amid violent opposition protests, said on Thursday he no longer has any real power but vowed not to resign, local news agency 24.kg reported.

At least 75 people have been killed and more than 1400 injured in the unrest, which has seen the opposition take power and name Roza Otunbayeva the country's new prime minister.

"I declare that as president I did not and will not lay down my duties," 24.kg quoted Bakiyev's statement as saying.

"At the moment I have no opportunity to influence the situation in the country," he added, acknowledging that the armed forces, police and security services have sided with the opposition.

Bakiyev confirmed in an interview with Ekho Moskvy radio station that he is in southern Kyrgyzstan, but did not say where.

In the same interview Bakiyev said he believes Russia has not "abandoned him," despite the fact that Russian Prime Minister Vladimir Putin and Otunbayeva talked by telephone on Thursday in a clear sign Russia was not opposed to the provisional government in Kyrgyzstan.

"It is important to note that the conversation was held with Otunbayeva in her capacity as the head of a national confidence government," Putin's spokesman Dmitry Peskov said. He said Putin told Otunbayeva that Russia was ready to offer humanitarian aid to Kyrgyzstan.

A representative of the provisional government, Almazbek Atambayev, will soon go to Moscow for talks, the AKIpress news agency reported, citing Otunbayeva.

Putin said earlier in the day that Bakiyev had made the same mistakes as his predecessor, Askar Akayev, who was ousted in the so-called tulip revolution in 2005, in which Bakiyev and Otunbayeva were leaders.

Russian President Dmitry Medvedev in a phone call to his Kazakh counterpart Nursultan Nazarbayev discussed the situation in Kyrgyzstan, Kremlin press service reported later on Thursday. Both of them emphasized violence and bloodshed in the country should be halted as soon as possible.

Kazakhstan has barred residents from visiting Kyrgyzstan and increased security on the border between the two countries.

Putin has called on the Kyrgyz government and opposition to restrain from violence, and denied claims by Kyrgyz opposition leaders that he had expressed support for the protesters. He said Russia had played no role in the events.

The protests began in the northwestern Kyrgyz town of Talas on Tuesday and spread to other regions of the country, including Bishkek, on Wednesday and Thursday.

Several opposition leaders were arrested on Tuesday and early Wednesday, but although they were later released the protests did not stop. The state television, parliament and government buildings were seized by protesters in Bishkek, and the Bakiyev's residence was burned. Kyrgyz media reported on Thursday that crowds were smashing up the Bishkek house of former prime minister Daniyar Usenov.

The opposition claimed on Thursday to have the support of the armed forces, border guards and police, and Otunbayeva said the provisional government was dismissing parliament and taking over from Bakiyev's administration.

She told a press conference the provisional government would work for six months to stabilize the situation, prepare changes in the constitution and hold presidential elections. The opposition accuses Bakiyev of mishandling the impoverished country and encouraging nepotism.

Opposition claims to be in control

Otunbayeva said the opposition, strongest in the north of the country, controls four out of Kyrgyzstan's seven regions. She added that Bakiyev had not given up his post and was trying to organize resistance in the country's south, which has traditionally been his power base.

Several thousand supporters of Bakiyev gathered for a rally in the southern city of Jalal-Abad in expectation of a speech from the president, a source in the city's authorities told RIA Novosti. Bakiyev has not yet appeared in public, but Kyrgyz Ambassador to Russia Raimkul Attakurov said he will soon address the nation.

"I, as guarantor of the Kyrgyz Constitution, declare that in the case of further destabilization, all responsibility falls on the opposition leaders, who will be punished according to the to the full extent of the law," Bakiyev said in an e-mailed statement, 24.kg reported.

Bakiyev said he did not see any reasons to lay down his duties, emphasizing he was elected for second term of presidency nine months ago and people voted for him. "I call on the instigators to come to their senses," he said.

He also denied accusations of nepotism - a major opposition complaint - saying his relatives had held high positions in the government of the previous president and had not been singled out under his rule.

Otunbayeva said the provisional government had abolished the country's development, investment and innovation agency, which was until recently headed by Bakiyev's younger son, Maxim. The agency controlled almost all financial flows coming into the republic from abroad.

Otunbayeva's deputy Temir Sariyev said Kyrgyzstan's national bank will temporarily manage a number of banks previously run by Bakiyev's entourage. "This was done to stop funds being pumped out of the republic," he said.

Bakiyev's rule has been marred by economic problems, high-profile murders, prison riots and disputes over the control of lucrative businesses.

The situation in Kyrgyzstan remains complicated. Some looters are armed and shops are being ransacked, reported RIA Novosti correspondent.

Earlier in the day, around 1,000 people gathered in the square in front of the government headquarters in Bishkek. Looters carried equipment and carpets out of the building and smoke could be seen rising from the sixth and seventh floors, where the presidential offices are.

The opposition called for calm and urged people to stop looting. The interior minister in the provisional government, Bolot Sherniyazov of the Ata-Meken opposition party, announced on state TV he had issued an order authorizing security forces to shoot at looters.

Despite the chaos, Bishkek Mayor Nariman Tuleyev has said that vital services would be maintained. Street sweepers, out as usual on Thursday morning, could be seen clearing up the debris from the violent protests.

Both Russia and the United States both have military bases in Kyrgyzstan and have taken a keen interest in the events there.

A Russian Air Force spokesman said on Thursday that the Russian airbase in Kant, around 20 kilometers (12 miles) outside Bishkek, was functioning normally.

Russian General Staff chief Nikolai Makarov said Russia had sent some 150 paratroopers to ensure the safety of Russian military families at the base.

The United States expressed concern over the unrest and said it was closely watching the situation. It called on all sides to refrain from violence and show restraint.

On Thursday military medics from the United States provided humanitarian aid, including antibiotics, bandages and other medicines, to people injured in the Bishkek clashes, a statement from the Pentagon Transit Center's press service said.

The U.S. State Department said the base, which supports international operations in Afghanistan, was functioning normally.

Kyrgyzstan has been unstable since Bakiyev took office in 2005, but major political unrest began last month when opposition forces accused the government of tightening its grip on power while failing to bring stability and economic growth.

Kyrgyz news agency Kabar reported on Thursday that the Kyrgyz provisional government will announce on Saturday, April 10, a day of national mourning for those killed during protests.