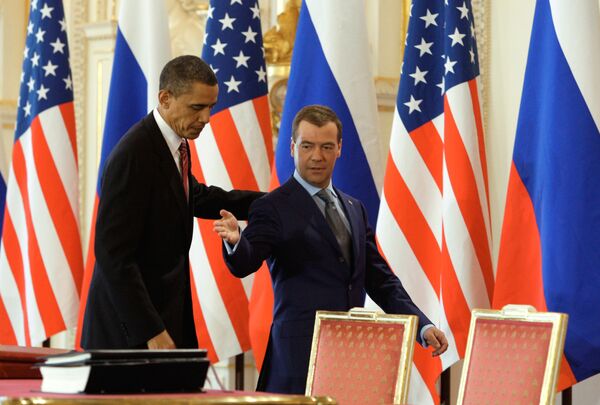 The Russian and U.S. presidents, Dmitry Medvedev and Barack Obama, signed on Thursday a new treaty on the reduction of strategic offensive weapons to replace the START 1 treaty, which expired in December 2009.

The Russian and U.S. presidents, Dmitry Medvedev and Barack Obama, signed on Thursday a new treaty on the reduction of strategic offensive weapons to replace the START 1 treaty, which expired in December 2009.

"Together we start on that path and prove the benefits of cooperation. Today is an important milestone for nuclear security and non-proliferation and for U.S.-Russian relations," Obama said at the signing ceremony in Prague.

Under the deal, which will be valid for 10 years unless superseded by another agreement, strategic offensive weapons will not be based on the territory of any third country.

Speaking after the signing of the documents, both presidents emphasized the importance of the document for nuclear security and for Russian-U.S. relations and pledged to work with lawmakers to ensure timely ratification of the documents by both sides.

The presidents met before the signing ceremony for wide-ranging discussions that included sanctions against Iran, arms control, non-proliferation and missile defense.

At the news conference, Medvedev said Iran's intransigence over its nuclear program may cause the UN Security Council to revise its approach.

"Unfortunately, Tehran is not responding to a number of constructive compromise proposals and we cannot close our eyes to this. Therefore, I do not rule out that the Security Council will have to revisit this issue," Medvedev said.

The Russian president reiterated, though, that sanctions against Iran must be "intelligent" and Moscow would aim both at convincing Tehran to act in accordance with international law and at protecting Russia's national interests.

Obama reaffirmed that the United States would not tolerate any actions by Iran that could spark an arms race in the Middle East.

"That is why United States and Russia are forming a coalition of nations insisting that the Islamic republic of Iran faces consequences because they continually failed to meet their obligations," Obama said.

"We are working together in the UN Security Council to pass strong sanctions on Iran and we will not tolerate actions that flout NPT [the Nuclear Non-Proliferation Treaty] risking arms race in the vital region," he added.

Both presidents also pledged to continue dialogue on missile defense to remove the disagreements that remain between Moscow and Washington over U.S. missile shield plans.

"We are interested in cooperating on this issue as closely as possible with our American partners," Medvedev said.

"We offered the United States our services in establishing a global missile defense system. We need to think about this," he added.

Russia has said it would have the right to withdraw from the new treaty if a quantitative and qualitative increase in U.S. strategic missile defense significantly harmed the effectiveness of Russia's strategic nuclear forces.

Obama said missile defense could be an important component of protecting the United States and its allies from the threat of a missile attack.

But he insisted that U.S. missile plans will harm neither Russia's interests nor the existing balance of forces.

"We also want to make clear that the approach that we have taken is in no way intended to change the strategic balance between the United States and Russia," Obama said.

The new arms cut deal has no restrictions on the development of a missile defense system; however, it does link strategic offensive weapons to defensive ones.

In February, Bulgaria and Romania said they were in talks with Obama's administration on deploying elements of the U.S. missile shield on their territories from 2015.

The treaty must be ratified by both houses of the Russian parliament and the U.S. Senate and will come into force after the sides exchange instruments of ratification.

The treaty could run into opposition from lawmakers, particularly in Washington, but Obama was bullish on its prospects.

"I feel confident that we are going to be able to get it ratified," Obama said.

Medvedev said Russia and the United States should submit the new disarmament treaty for ratification simultaneously and vowed that there would be no delays on Moscow's part.

"In our history, especially if we take the Soviet era, there were cases when one state ratified a treaty while the other said 'sorry, the circumstances have changed.' We must not allow this," the president said, reflecting Russian doubts over support for the treaty in the U.S. Senate.

Russian and U.S. senators will hold meetings on April 20-21 to discuss the ratification of the new treaty.

Deputy Foreign Minister Sergei Ryabkov said the pact reflects new positive trends in the Russian-U.S. relations and does not harm interests on either side.

"This treaty is based strictly on a parity principle. It does not contain unilateral commitments related to certain mechanisms or limitations," Ryabkov said.

The Russian diplomat said the treaty allows Russia to use ICBMs that will be decommissioned under the treaty as carrier rockets for spacecraft.

"According to our plans, we will decommission [some ICBMs] to fit the reduction ceilings and will convert them for space launches. It is a very cost effective measure," Ryabkov said.

Viktor Zavarzin, head of the State Duma Defense Committee, said the new treaty would strengthen Russia's national security because it ensures strategic balance of forces and for the first time cuts strategic offensive arsenals on both sides to unprecedentedly low levels.

The Russian lawmaker added that the new document would serve as an example for other nuclear powers to join the strategic arms reduction process.