Factbox: History of diplomatic relations between U.S.S.R./Russia and United States 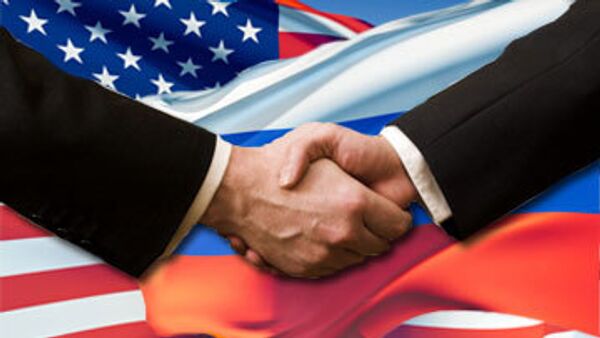 Political dialogue began to revive when the countries resumed commercial ties in the late 1920s and early 1930s.

After the 1917 October Revolution, the United States refused to recognize the new Soviet government. Political dialogue began to revive when the countries resumed commercial ties in the late 1920s and early 1930s.

During World War II, the U.S.S.R. and the U.S.A. were allies and cooperated closely to defeat Hitler. After the attack of Nazi Germany on the U.S.S.R., the U.S. government began providing economic assistance to help the U.S.S.R. in its struggle against the occupying Nazi forces.

During WWII, the U.S.A. helped its allies under the Lend-lease program.

On June 6, 1944, British and American air and ground forces landed in Normandy, opening the Second Front. On April 25, 1945, Soviet and American troops met near the German city of Torgau on the Elbe River.

The meetings between the Soviet, American and British heads of state in Tehran (November 1943), Yalta (February 1945) and Potsdam (July-August 1945) proved critically important for wartime cooperation and the postwar makeup of the world.

Soon after WWII, the world split into two blocs with different social and political systems and interests. This was the unofficial start of the Cold War between the U.S.S.R. and the U.S., which was to last for over 40 years. The competing blocks took formal shape in the military-political organizations NATO and the Warsaw Pact.

The approximate parity between the two blocs and the growing threat of global destruction in a nuclear exchange between the U.S.S.R. and the U.S.A. deterred the two superpowers from a direct military confrontation. The U.S. - Soviet rivalry led to the ever-growing buildup of arms by both blocs. The resulting nuclear arms race put enormous strain on the economies of both blocs, resulting in a tough diplomatic confrontation.

China was the first site of the clash between the two systems. The Chinese Civil War (1946 -1949) was ultimately won by the Communist Party of China led by Mao Zedong.

The second major clash between the two systems occurred in Korea, which was split in two parts as a result. In the armed conflict of 1950-1953, the U.S.S.R. supported North Korea and China, while the U.S. and a coalition of several other countries backed South Korea.

In 1956, global tensions were escalated by turmoil in socialist countries and attempts by Britain, France and Israel to seize the Suez Canal in Egypt. This time both superpowers - the U.S.S.R. and the U.S.A. - acted to contain the conflict.

The Cuban Missile Crisis (October 1962) was the most dramatic event in the history of postwar Soviet-American relations. It posed the greatest threat to the U.S., the Soviet Union, and the rest of the world. This crisis compelled the Soviet and American leaders to realize that a direct military confrontation could lead to the destruction of the human race. After reaching the brink, Cold War tensions gradually began to ease. The two superpowers began talking about curtailing the arms race for the first time.

Throughout the 1960s, the Soviet and American leaders worked toward normalizing relations. During this period, they signed a number of important bilateral documents, such as the 1963 Memorandum of Understanding to Establish a Direct Communications Link, known as the "Hot Line"; the 1963 Treaty Banning Nuclear Weapon Tests in the Atmosphere, Space and Under Water; the 1967 Treaty on Principles Governing the Activities of States in the Exploration and Use of Outer Space, Including the Moon and Other Celestial Bodies; and the 1968 Nuclear Non-Proliferation Treaty.

In the 1970s, the leaders of the two superpowers adopted bilateral commitments on preventing nuclear war, restricting strategic arms and promoting disarmament.

In 1971, the two sides signed the Agreement on Measures for Reducing the Risk of Outbreak of Nuclear War Between the U.S.A and the U.S.S.R.

In 1972, they concluded the Anti-Ballistic Missile Treaty, and the Interim Agreement Between the U.S.A and the U.S.S.R. on Certain Measures With Respect to the Limitation of Strategic Offensive Arms (SALT-1).

In December 1974, the U.S. Congress passed the Jackson-Vanik amendment to the Trade Act to prohibit granting most-favored-nation status to countries that violate or seriously restrict the rights of their citizens to emigrate.

After 1985, when Soviet citizens were allowed to exit the country and restrictions on emigration were lifted, this amendment became irrelevant but still has not been repealed.

The successful docking of the Soyuz and Apollo space ships in July 1975 as part of the Soyuz-Apollo international space program was the first major event in bilateral cooperation in space.

After the Soviet Union sent troops into Afghanistan in 1979, the U.S. administration developed the Carter Doctrine, which called for measures aimed at exerting political and economic influence on the U.S.S.R. and influencing its foreign policy. The U.S. imposed an embargo on grain supplies to the U.S.S.R. and downgraded cultural, scientific and technical cooperation. The majority of Western countries boycotted the 1980 Olympic Games in Moscow.

In November 1985, Geneva hosted a bilateral summit during which Soviet leader Mikhail Gorbachev met with U.S. President Ronald Reagan. They later signed a treaty to eliminate their intermediate-range and shorter-range missiles, which was finalized in 1987.

With the collapse of the Soviet Union in 1991, the Cold War came to an end.

In June 1992, Russian President Boris Yeltsin made his first official visit to the U.S. In January 1993, American President George H. W. Bush visited Moscow. The talks resulted in the signing of Treaty on the Further Reduction and Limitation of Strategic Offensive Arms (START-2).

The G-8 summit was held in Denver, Colorado, in June 1997. For the first time, Russia attended as a full-fledged member and took part in discussions on practically all the items on the agenda.

At their meeting in November 2001, President Vladimir Putin and George W. Bush opened a new chapter in bilateral relations and pledged to overcome the lingering effects of the Cold War.

In 2002, the U.S. Department of Commerce recognized the market status of the Russian economy under American trade laws.

During President Bush's visit to Moscow in May 2002, the sides signed a Treaty on Strategic Offensive Reductions and the Joint Declaration on the New Strategic Relationship. The U.S. formally announced its withdrawal from the ABM Treaty, but this did not affect bilateral relations. The only consequence was Russia's withdrawal from the START-2 Treaty. However, Russia and the U.S. continued their close cooperation on arms control.

On April 6, 2008, the sides adopted a declaration following bilateral talks in Sochi, reaffirming their intention to work out a new agreement to replace the START treaty.

However, with the election of Barack Obama as president, Washington began sending signals that it wished to improve bilateral cooperation and to "reset" relations.

Russian President Dmitry Medvedev and Obama met for the first time on April 1, 2009 on the sidelines of the G-20 summit in London.

The main result of the visit was the signing of a bilateral framework agreement on strategic offensive arms, which has become the foundation for the new treaty.

At the summit, the sides also signed an important agreement on air- and ground-based transit of military cargo to Afghanistan via Russian territory.

On March 26, 2010, Medvedev and Obama spoke on the phone. They agreed to meet in Prague on April 8, 2010 to sign a bilateral treaty on the further reduction and limitation of strategic offensive arms.

This agreement will replace the 1991 START-1 treaty that expired on December 4, 2009, and the bilateral Treaty on Strategic Offensive Reductions (SORT) signed on May 24, 2002.