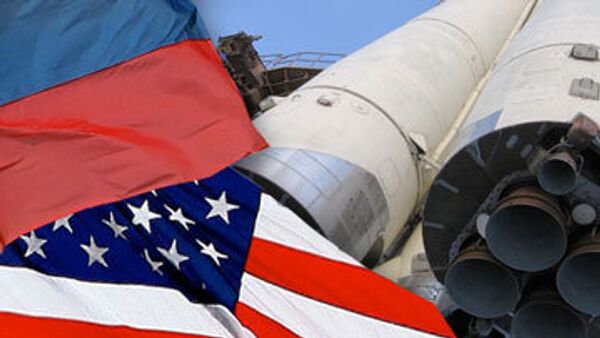 © Сollage by RIA Novosti
Subscribe
Russian President Dmitry Medvedev and U.S. President Barack Obama will sign on Thursday a new treaty on the reduction of strategic offensive weapons to replace the START 1 treaty, which expired in December 2009.

Russian President Dmitry Medvedev and U.S. President Barack Obama will sign on Thursday a new treaty on the reduction of strategic offensive weapons to replace the START 1 treaty, which expired in December 2009.

The Russian and U.S. presidents agreed to start the preparation of a new treaty at a summit in London on April 1, 2009.

The sides set up a joint commission on the preparation of the document comprising more than 30 officials and experts. The commission has held ten rounds of talks in Geneva since May, 2009.

Both presidents closely monitored and supervised the talks and regularly consulted one another on the progress of negotiations.

The 160-page document comprises the text of the treaty, additional articles, a protocol on the implementation of the treaty and a number of supplements.

The treaty will have a validity term of ten years unless it is superseded by another strategic arms reduction agreement.

Within seven years after the treaty comes into force, each side will reduce and limit their strategic offensive weapons to the following levels:

- Up to 800 delivery vehicles, including operational and stockpiled ICBMs, SLBMs, and strategic bombers.

The Strategic Offensive Reductions Treaty (SORT), better known as the Moscow Treaty, which was signed in 2002, provided for a ceiling of 1,700-2,200 nuclear warheads for each of the two states.

Russian military officials believe that the reduction ceilings established by the new treaty will not harm the development of Russia's nuclear triad and will ensure a sufficient level of deterrence.

The treaty also stipulates that strategic offensive weapons are to be based solely on the national territories of Russia and the United States.

The new treaty legally binds the obligations for reductions in strategic offensive weapons to the development of missile defenses.

The document contains guarantees that strategic submarines and heavy bombers armed with conventional weapons will not be modified to carry nuclear weapons or missile interceptors.

Russia has been concerned that the United States could circumvent the arms cuts by returning mothballed delivery vehicles to combat use if it wanted to.

WITHDRAWAL FROM THE TREATY

The document stipulates that each side has the right to unilaterally withdraw from the treaty if it decides that any of the provisions of the treaty could lead to an imminent threat to its national security.

Russia earlier emphasized its right to withdraw from the treaty if a quantitative and qualitative increase in U.S. strategic missile defense significantly harmed the effectiveness of Russia's strategic nuclear forces.

The new pact establishes a simplified verification mechanism, which will almost halve verification costs. Russia has in the past bridled at some of the more intrusive elements of the START 1 treaty.

For instance, the new treaty does not include monitoring of the Votkinsk missile production plant, located about 1,000 kilometers (621 miles) east of Moscow, as Russian inspectors have not been monitoring similar facilities in the United States since 2001.

The procedures for the dismantling and destruction of strategic weapons will be simplified and made technologically more effective. They will not require the presence of inspectors at destruction sites for verification purposes.

The treaty must be ratified by the Russian parliament and the U.S. Congress and will come into force after the sides exchange instruments of ratification.

Russia does not insist on simultaneous ratification of the treaty.