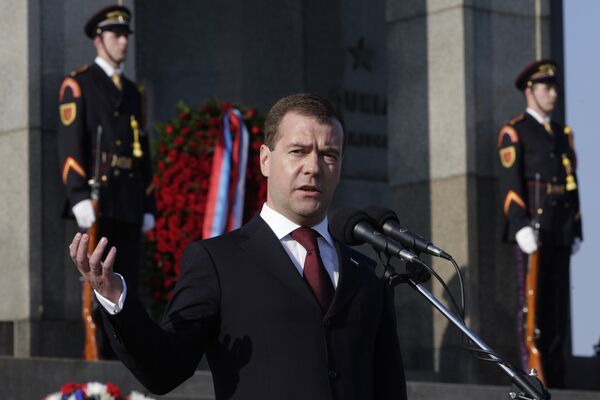 © POOL
/
Go to the photo bank
Subscribe
The Russian president said on Wednesday that the clashes in Kyrgyzstan were an extreme form of public protest and called the Central Asian country Russia's strategic partner, Dmitry Medvedev's press secretary said.

The Russian president said on Wednesday that the clashes in Kyrgyzstan were an extreme form of public protest and called the Central Asian country Russia's strategic partner, Dmitry Medvedev's press secretary said.

"This is Kyrgyzstan's domestic affair but the form this protest has taken points to an extreme level of public outrage with the authorities," Natalya Timakova quoted him as saying.

The protests, which started in the northwestern Kyrgyz town of Talas on Tuesday, spread to other regions of the Central Asian country, including the capital Bishkek. Some 47 people have been killed and 400 injured, according to health authorities.

"The president thinks that most important thing is that further deaths are prevented and control over the country is restored," she added.

A government formed by opposition in Kyrgyzstan said it has taken full power in the country while the whereabouts of the country's president, Kurmanbek Bakiyev, remain unknown.

"Kyrgyzstan has been and remains Russia's strategic partner so we will closely follow the developments in the republic," Timakova said.

"When President Bakiyev came to power [after the so-called tulip revolution in 2005], he harshly criticized the toppled president, Akayev, for nepotism and giving his relatives top economic posts. I get the impression that Bakiyev has fallen into the same trap," Putin said.

Kyrgyzstan, where Russia and the United States both have military bases, has been unstable since Bakiyev took office but major political unrest began last month when opposition forces accused the government of tightening its grip on power while failing to bring stability and economic growth.