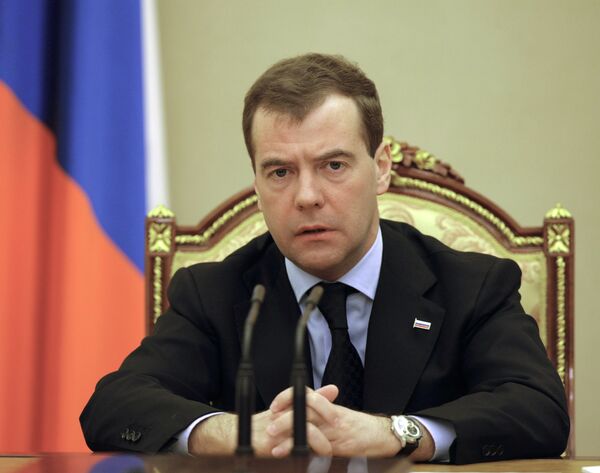 Russian President Dmitry Medvedev has ordered a range of new measures to improve Russia's fight against terrorism in the volatile North Caucasus region, the Kremlin announced on Wednesday.

The president ordered the creation of a special anti-terrorism task force in the North Caucasus Federal District. Federal Security Service head Alexander Bortnikov and Russian Security Council chief Alexander Bastrykin are expected to have the group up and running by April 19.

Medvedev also ordered officials to prepare by the end of the month a proposal on a new program to combat crime and terrorist acts in the North Caucasus.

The Kremlin also said that Prosecutor General Yury Chaika, Security Council chief Alexander Bastrykin and the head of Kremlin administration, Sergei Naryshkin, had been given until May 15 to submit proposals to toughen punishments for accomplices of terrorists.

Medvedev called last week for a crackdown on people who provide any form of assistance to terrorists.

"When we are talking about such crimes, there cannot be any leniency depending on the role played," the president said on Friday. "It is not important what they do - make soup or wash their clothes - these are still crimes."

The Kremlin statement said that the president's orders stemmed the necessity of taking into account the specifics of law enforcement in the North Caucasus when planning and implementing measures to optimize the Interior Ministry's activity.

They follow an emergency meeting in Dagestan last week convened by Medvedev in response to terrorist attacks in Moscow and Dagestan that killed more than 50 people.

On March 29, two deadly blasts occurred in two Moscow subway stations, claiming some 40 lives and injuring dozens of people. The attackers struck the Lubyanka and Park Kultury stations during the morning rush hour.

Officials say the suicide bombers were from Dagestan. The restive southern Russian republic was itself hit by terrorists two days later, when two explosions in the town of Kizlyar, near the border with Chechnya, killed 12 people and left 29 injured.

Medvedev said the bombings were links in the same chain, while Prime Minister Vladimir Putin said a single terrorist group carried out the attacks.

Russia has been fighting militants in the North Caucasus for almost two decades, including two brutal wars against separatists in Chechnya. Medvedev created the North Caucasus Federal District last year as part of efforts to improve the regional economy and remove incentives for locals to join militant groups, but the agenda has swung back to security-oriented solutions since last week's attacks.