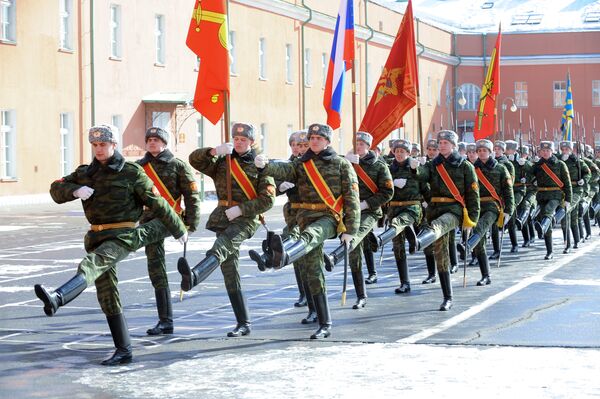 © RIA Novosti . Sergei Piatakov
/
Go to the photo bank
Subscribe
Russian servicemen will participate in the May 9 Victory Day parade in the Ukrainian capital, Kiev, a top Russian military official said on Monday.

Russian servicemen will participate in the May 9 Victory Day parade in the Ukrainian capital, Kiev, a top Russian military official said on Monday.

"[Russian troops] are to participate in May 9 activities on the territory of Belarus and Ukraine," First Deputy Defense Minister Col. Gen. Alexander Kolmakov said.

Asked which CIS countries had accepted the Russian invitation to participate in the Victory Day parade in Moscow, Kolmakov said "many have already confirmed their participation," without being more specific.

A Ukrainian official said in mid-March Russian and Ukrainian warships would for the first time jointly take part in celebrations of the 65th anniversary of victory over Nazi Germany in Ukraine's Black Sea port of Sevastopol.

Russia's Black Sea Fleet uses a range of naval facilities in Ukraine's Crimea, including its main base in Sevastopol, as part of a 1997 agreement under which Ukraine agreed to lease the bases to Russia until 2017.

A Sevastopol city official said Russian and Ukrainian warships would move into a special "parade formation" in Sevastopol Bay.

On land, the parade will be opened by veterans of the Great Patriotic War, to be followed by a march by Black Sea Fleet and Ukrainian Navy drummers, ships' crews and naval infantry personnel.

In all, about 2,000 Russian and Ukrainian navy personnel will take part in the parade.

The Autonomous Republic of Crimea has been a source of tension between Russia and Ukraine since the collapse of the Soviet Union in 1991. Tensions rose sharply in 2003 over a bitter border dispute in the Kerch Strait, and again in 2008, over the deployment of Russia's Black Sea Fleet during a five-day war with Georgia.