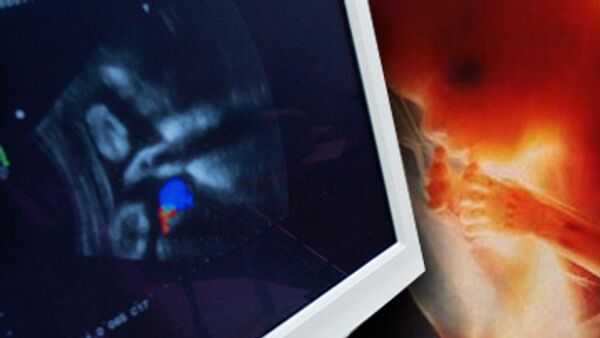 © Сollage by RIA Novosti
Subscribe
Every year 1.2 million Russian women deliberately terminate pregnancy and 30,000 of them become sterile, many from the estimated 180,000 illegal abortions.

Every year 1.2 million Russian women deliberately terminate pregnancy and 30,000 of them become sterile, many from the estimated 180,000 illegal abortions.

Russian law permits abortions up to the 12th week of pregnancy. If the future mother is suffering from tuberculosis or mental illness she is permitted to terminate a pregnancy later than 12 weeks.

There is also a variety of social factors, which permit women to commit an abortion up to the 22nd week of pregnancy, including rape, imprisonment and poverty, and death or severe disability of the husband.

Nonetheless, Illegal abortion is widespread in Russia - unofficial estimates say 10-15% of the total, or up to 180,000 terminations.

A quarter of deaths among pregnant women are the result of illegal abortions, but according to investigators, there were just 28 cases opened into illegal abortions in 2009. The figure was 27 in 2008, and over those two years less than 10 cases made it to court.

RIA Novosti journalists investigated the cost of illegal abortion in clinics in Moscow. They found that the average cost of an abortion after the 12th week of pregnancy is $500-$850.

Several clinics even offered discounts on abortions for International Women's Day, a popular holiday in Russia.

Meanwhile, the number of abortions in Russia is almost equal to the number of babies born every year. According to data provided by the Russian Health Ministry, in 2008 there were 1.7 million births in Russia and 1.2 million abortions.

Experts say the low birth rate in Russia is reaching a critical point. It began to decline in 1992 as a result of poor medical services, social problems and high alcoholism. The government recognizes the problem, however, and is working to reverse the trend. Earlier this year it heralded statistics showing the country's population had increased for the first time in 15 years.