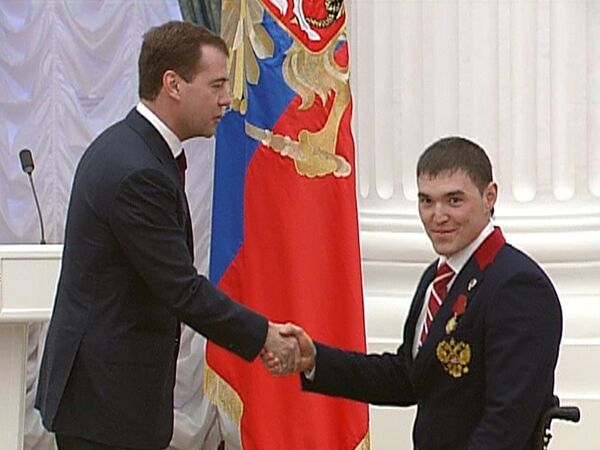 Russian President Dmitry Medvedev met Russian medalists of the 2010 Vancouver Paralympic Games in the Moscow Kremlin on Friday to personally award them state prizes and decorations.

This is a first time Paralympic athletes will be awarded in the Kremlin in this way. On previous occasions, the president met medalists but did not present them with awards.

"The Olympics left us with mixed feelings," Medvedev said. "Here [at the Paralympics,] the emotions were the same for everyone. You have all done very well."

The president said that the fact that Russian athletes had begun to prepare for the Paralympic Games in advance and had been on top form played a big part in their success.

"You have shown great willpower and courage. It should be an example for everyone who participates in competitions," the president added.

The Russian Paralympic team topped the Vancouver overall standings with 38 medals and came second in the gold medal count after Germany. It performed better than the Russian Olympic team, which finished the Games with its worst Winter Olympic medal tally in history, winning just three golds, five silvers and seven bronzes and finishing 11th in the overall table.

Last week, during a meeting of the presidential council for sports, Medvedev said "such results are an achievement for our Paralympic athletes, who showed great moral courage and will for victory."

The president also said the Russian authorities will work more actively to improve conditions for disabled athletes and further develop Paralympic sports in the country.

"It is necessary to think about the future. Of course, training is important, but for proper training, financial measures are also needed," Medvedev said.

He stressed the importance of providing Paralympic athletes with the necessary equipment and the creating new schools for children with disabilities.

The president said the Russian authorities will provide disabled access to all Olympic events, and sport and recreational facilities at the 2014 Winter Paralympic Games, which will be held in Russia for the first time.

"We will set new accessibility standards, which will become an example for the whole Russia and will be implemented throughout the country," Medvedev said.