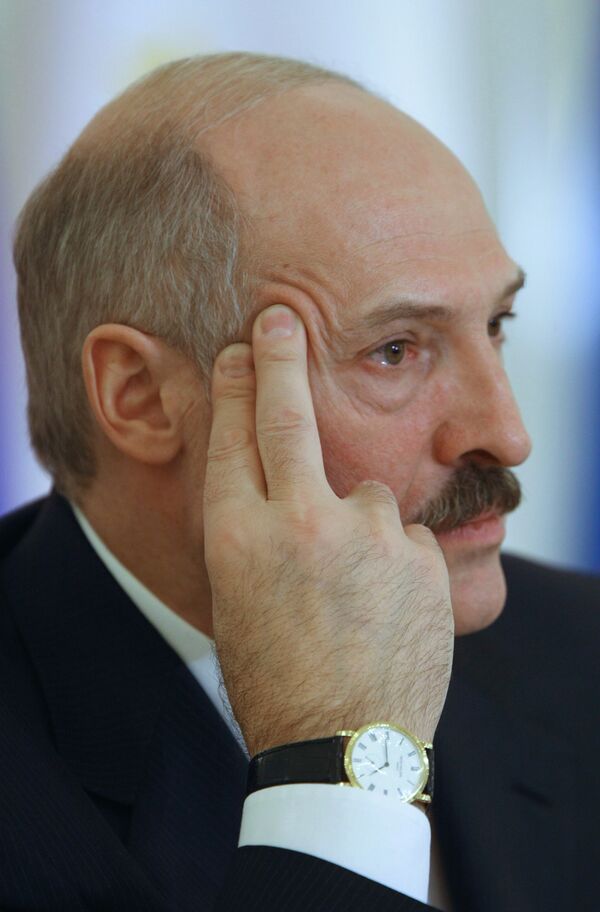 When Belarusian President Alexander Lukashenko issued a decree on February 12 affirming the Belarusian-Russian intergovernmental protocol whereby Minsk would import oil from its eastern neighbor and allow oil to be transported across Belarus for 2010, many analysts thought that the oil conflict between Belarus and Russia had run its course

When Belarusian President Alexander Lukashenko issued a decree on February 12 affirming the Belarusian-Russian intergovernmental protocol whereby Minsk would import oil from its eastern neighbor and allow oil to be transported across Belarus for 2010, many analysts thought that the oil conflict between Belarus and Russia had run its course.

In fact, nothing could be further from the truth; Lukashenko was merely buying time. The fact of the matter was that the Belarusian president had been forced to come to terms because his country's refineries had only enough oil for a few days. Lukashenko clearly intended to revisit the issue, and now he has done so with a vengeance.

Alexander Lukashenko is intentionally fighting back against Russia with everything he's got. First, there was the scandalous agreement whereby Belarus would import around four million metric tons of oil a year from Venezuela. Of course, this doesn't measure up against the more than 20 million tons Belarus imports from Russia, and even if Belarus paid full price for Russian oil, the Venezuelan equivalent would still be more expensive. But the public relations impact was monumental. The louder the better.

Furthermore, in an interview with one Argentinean newspaper, Lukashenko revealed that Venezuela could perhaps be involved in the privatization of Belarusian oil refineries, which, in light of the fact that Russian officials have long tried to persuade the Belarusian president to sell these refineries to Russian companies, means the situation has become absurd.

Russia plans to invest $12 billion in Venezuela's Junin 6 project, while at the same time Venezuela plans to buy assets that Russia has long had its eye on. And let's not forget the scandalous lawsuit in the Economic Court of the CIS regarding the legality of customs duties on Russian exports of oil products and petrochemical raw materials to Belarus. It is clear that the lawsuit is groundless, and moreover many people only heard of the court's existence after this incident. Nevertheless, the lawsuit has caused quite a commotion.

And the latest news is that Alexander Lukashenko has instructed his First Deputy Prime Minister Vladimir Semashko to begin negotiating with Ukraine to connect Belarus with the Odessa-Brody pipeline, a move clearly intended to give Minsk access to Venezuelan oil.

This idea cannot fail to irritate Moscow for at least two reasons: First of all, tankers from Venezuela would have to cross the Mediterranean and pass through the already overcrowded Bosporus, where Russian vessels headed in the opposite direction are periodically delayed by traffic jams. Second, the Odessa-Brody pipeline was built in 2001 to transport Caspian oil to Europe - an obvious snub to Russia.

Nevertheless, it turned out that the pipeline was completely unfeasible. Even Orange Ukraine had to grit its teeth and eat crow when the pipeline stopped transporting oil from Odessa to Brody and began transporting oil - Russian oil - from Brody to Odessa. Now suddenly Lukashenko has decided to revive a project that even supporters of the Orange Revolution refused to support. The economic rationale for importing oil from Venezuela is non-existent, a fact that becomes clear with just one look at a map of the world.

Sure, these projects could be left unrealized. It is even safe to say that they will most likely remain rhetorical. But the aftertaste remains, the allegations multiply and there is a new scandal every week.

Then there is still the issue of natural gas. The price of natural gas for Belarus in the first three months of 2010 was $168 per thousand cubic meters, which is almost half of what Ukraine pays. Moreover, Minsk is exempt from paying the 30% export duty. But even that is not enough! It continues to pay $155 per thousand cubic meters for gas and still it has run up a debt of $94.5 million for gas. Gazprom recently finalized a deal to buy 50% of Beltransgaz, and now it must address the very pressing issue of how to restructure the company's leadership.

And here we come to the main issue at hand. What should be more important in our relations with our post-Soviet brothers? Should we integrate with the Slavic nations of the CIS while trying to strengthen our geopolitical position? Or should we simply pursue a more practical approach to our relations with our neighbors?

The dilemma is not new. It's just that it's becoming abundantly clear that combining these strategies is very difficult, because neither political nor practical gains seem easy to come by. Lukashenko is a prime example of this. Our relations don't seem brotherly at all. The times when a union state or at least a common currency was up for discussion are long gone. And we get no particular economic dividends, either. And so we lose money and the list of disagreements only grows. Meanwhile, there is a sense of some kind of political surrealism. Lukashenko is ostensibly a political ally, so we make economic concessions for him. But since we are still ostensibly pragmatists, these concessions are not comprehensive. Consequently, Lukashenko starts to openly embarrass us, staging ever more outrageous publicity stunts. We try not to notice, and this only seems to encourage him.