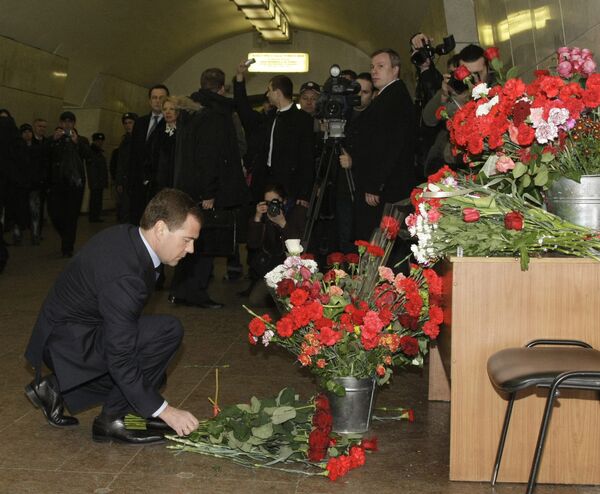 © POOL
/
Go to the mediabank
Subscribe
International
India
Africa
Russian President Dmitry Medvedev on Monday visited the scene of a deadly suicide bombing in the Moscow subway and laid flowers at the site.

Russian President Dmitry Medvedev on Monday visited the scene of a deadly suicide bombing in the Moscow subway and laid flowers at the site.

The first blast took place at 7:52 a.m. (03:52 GMT) at the Lubyanka station near the former KGB headquarters, which now houses the Federal Security Service. The second bomb was detonated some 40 minutes later four stops along the line at Park Kultury station, which is also within walking distance of the Kremlin.

Medvedev laid a wreath at the spot on the Lubyanka station platform where the doors of the second carriage opened and the first bomber detonated her explosives, killing at least 24 people.

The president said those behind the terrorist attacks would be tracked down and eliminated.

"These are simply beasts, and regardless of their motives, what they did is a crime by any legal or moral standard," Medvedev told reporters on hand for the occasion.

"I have no doubts whatsoever that we will find them and eliminate all of them," he said, adding that everyone involved in the November bombing of the Nevsky Express had been killed. Twenty-seven passengers died in that attack, the first major terrorist incident beyond Russia's North Caucasus since 2004.

He also said he would soon sign a decree to establish a modern transport control and warning system in Russia.

Full service has by now been restored on the Sokolnicheskaya metro line, including for the stations where the bombings occurred.

Two women and a man are wanted in connection with the terrorist attack, a law enforcement source said.

Eyewitnesses described the chaos and panic that followed the blasts.

"I was in shock. I was deafened by the sound of the blast, but at first I didn't think it was a terrorist attack. Then I saw all the smoke and realized it had been an explosion. My only thought was to get away as quickly as possible," said Alexandra Antonova, who was at the Lubyanka station when the first explosion occurred.

Another witness said that some of the wounded were pushed along in the crowd of around 1,000 people trying to leave the station via one escalator.

"At the exit near the escalator two wounded women, who had been carried along in the crowd, overtook me. They had cuts on their faces and burnt hair. There was also a man with a wound on his neck."

Prime Minister Vladimir Putin vowed that the terrorists behind the attack would be eliminated.

"As you know, today in Moscow we saw a terrible crime against peaceful civilians," Putin said in the Siberian city of Krasnoyarsk before canceling his engagements and returning to Moscow, where he visited one of the Moscow hospitals where some of the injured are undergoing treatment.

"We have said long ago the country is not ready to abolish the death penalty. The death penalty should be renewed for the most heinous crimes. It's difficult to imagine a crime more horrible than the one that occurred today," Zyuganov told journalists.

UN Secretary General Ban Ki-Moon's spokesman said in a statement: "The secretary general strongly condemns the twin suicide bombings that took place in Moscow's subway this morning, causing the tragic loss of many innocent lives and injuries to many other people."

"The secretary general extends his deepest condolences to the families of the victims, and to the government and people of the Russian Federation. He also wishes the many injured a swift recovery," the statement said.

"The American people stand united with the people of Russia in opposition to violent extremism and heinous terrorist attacks that demonstrate such disregard for human life, and we condemn these outrageous acts," Obama said in a statement.

Other world leaders, too, have sent Russia messages of compassion and support.

The heads of Russia's main religious faiths joined the chorus of voices speaking out against the bombings.

Patriarch Kirill of Moscow and All Russia, who heads the Russian Orthodox Church, called for solidarity in the face of the tragedy, criticizing not only the terrorists but also people who try to cash in on human misery.

"I've just been told that taxi drivers have raised their prices several times just because people are unable to use the subway," he said, warning that "this money will do you no good."

Markin said the second attack had been carried out by a "dark-haired woman" and that "fragments of her body" found at the scene suggested she had had the equivalent of 1.5 kg of TNT strapped to her body.

The head of the Federal Security Service (FSB), Alexander Bortnikov, said terrorists from Russia's North Caucasus may have been involved in the attacks.

Speaking at a news conference at RIA Novosti, the head of the State Duma Security Committee, Vladimir Vasilyev, warned journalists against playing up the "nationalist and religious angle" of stories and advised them to carefully verify sources.

There have already been media reports of attacks on "Muslim looking" people in Moscow. Echo Mosvky radio said two Muslim women were beaten on a train between the Avtozavodskaya and Paveletskaya metro stations.

Russia has been fighting militants in the North Caucasus for almost two decades, including two brutal separatist wars in Chechnya. Analysts suggested that Monday's attacks were revenge for a recent operation in Chechnya that saw the deaths of over 20 radical Islamic fighters.

The last major terrorist incident to hit Moscow occurred in the fall of 2004, when 10 people were killed in a suicide bombing outside a metro station.