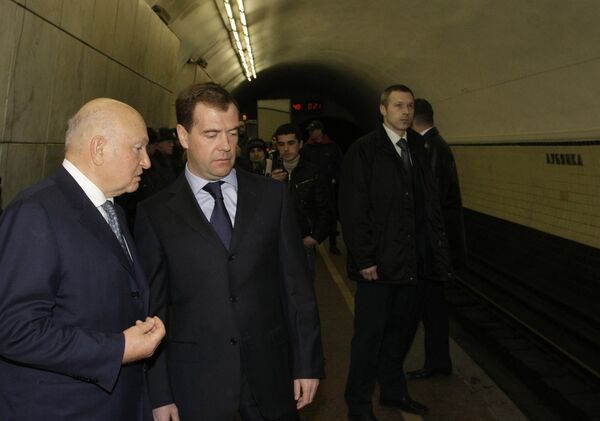 © POOL
/
Go to the mediabank
Subscribe
International
India
Africa
Russian President Dmitry Medvedev on Monday laid flowers at the site of a suicide bomb attack in the Moscow metro.

Russian President Dmitry Medvedev on Monday laid flowers at the site of a suicide bomb attack in the Moscow metro.

Twin blasts occurred on Monday morning killing at least 38 people and injuring 70. The first took place at 7:52 a.m. (03:52 GMT) at the Lubyanka station near the former KGB headquarters, which now houses the Federal Security Service. The second bomb detonated some 40 minutes later four stops along the line at Park Kultury station, which is also within walking distance of the Kremlin.

Medvedev took the escalator down to the Lubyanka station platform and laid a wreath at the spot where the doors of the second carriage opened and the bomber detonated her explosives, killing at least 24 people.

The president reiterated that those behind the terrorist attacks would be tracked down and eliminated.

"These are simply beasts, and regardless of their motives, what they did is a crime by any legal or moral standard," Medvedev told reporters on hand for the occasion.

"I have not doubts whatsoever that we will find them and eliminate all of them," he said, adding that everyone involved in the November bombing of the Nevsky Express had been killed. Twenty-seven passengers died in that attack, the first major terrorist incident beyond Russia's North Caucasus since 2004.

Prime Minister Vladimir Putin cut short a trip to Siberia and visited one of the Moscow hospitals where some of the injured are undergoing treatment.