No Kiev, no Euro 2012 in Ukraine, warns UEFA chief 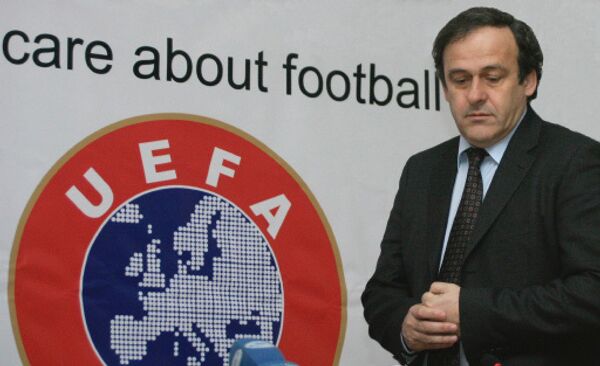 UEFA President Michel Platini said on Monday that Ukraine could still lose its right to host the 2012 European Football Championship due to the slow pace of stadium construction.

Ukraine's readiness to hold the 2012 tournament, which it is to share with Poland, has been a constant source of concern for UEFA. Before December, European football's governing body had only confirmed games would be played in the capital, Kiev.

However, on Monday, Platini suggested that delays in reconstruction of the Ukrainian capital's Olympic stadium could put even that in doubt.

"If there is no Kiev, there will be no Ukraine," he told journalists in Brussels.

In early December 2009, three other Ukrainian cities, Kharkov, Lvov and Donetsk, were confirmed by the UEFA as venues.

"The construction of the stadium has not moved one centimeter," Platini said of the arena in the western Ukrainian city of Lvov.

He expressed the hope that Ukraine would show more progress in constructing Euro 2012 facilities.

"We have no plan B," he said, but added: "Germany could be this plan."

The UEFA chief said he would visit Ukraine in 10 days to meet the country's new president, Viktor Yanukovych, and members of the government, whom he said he expected to provide him additional guarantees over the issue.

The former Soviet state's economy was badly hit by the global recession, which was aggravated in Ukraine by continuous political infighting under former President Viktor Yushchenko. Ukraine's gross domestic product declined 15%, year-on-year, in 2009, according to the country's top statistics body.

Bickering between Yushchenko and the then-prime minister, Yulia Tymoshenko, also took its toll on the Euro 2012 preparations, as the president refused to pay for infrastructure construction out of national reserves.

"Nowhere in the world would an event of this magnitude be planned without attracting investment," he said.

Poland will host games in Warsaw, Poznan, Wroclaw, and Gdansk.