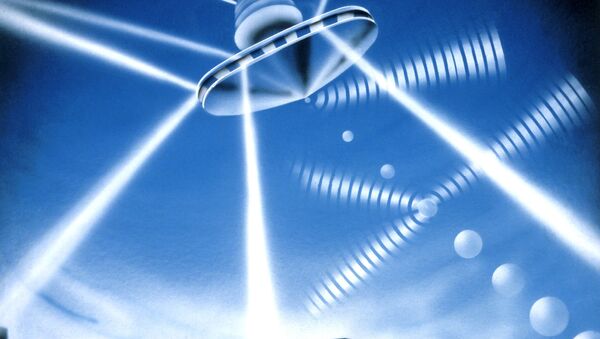 © Sputnik /
/
Go to the photo bank
Subscribe
A Tajik teenager quickly became a local hero after he had shown a 50-second footage of a "flying saucer" captured with a built-in camera on his mobile phone.

A Tajik teenager quickly became a local hero after he had shown a 50-second footage of a "flying saucer" captured with a built-in camera on his mobile phone.

Dozens of residents of Khujand in northern Tajikistan have reported sightings of an unidentified flying object over the city on March 22, but only Bakhtovar Khurshedzod, a 9th grade school student, was smart enough to film the unusual event.

According to the teenager, he was playing with his younger brother in the yard when a strange object appeared in the sky, flying soundlessly.

"It [the UFO] was red and it was surrounded by white light...It was moving slowly toward the mountains, then suddenly accelerated and disappeared...It was not a kite or a plane, that's for sure," the Asia-Plus news agency quoted the schoolboy as saying.

Local air traffic authorities denied registering any UFOs over the city on that day, but admitted that "radars at the local airport are switched on only when it is necessary."

Local residents claim that it was not the first UFO sighting in the area. A similar object appeared over the city in late 1990s but nobody was able to produce "hard evidence" of the event at that time.

Khujand is the second-largest city of Tajikistan with a population of about 149,000. It is situated on the Syr Darya River at the mouth of the Fergana Valley.