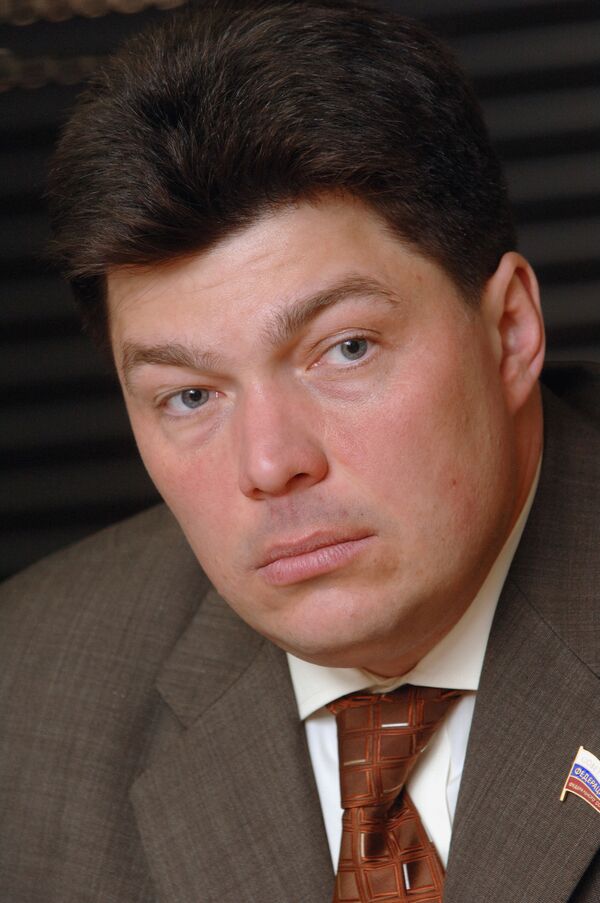 © RIA Novosti . Vladimir Vyatkin
/
Go to the mediabank
Subscribe
International
India
Africa
Even if Russia and the United States sign a new strategic arms reduction treaty, it may not be immediately ratified by the U.S. parliament, Mikhail Margelov, the head of Russia's upper house international affairs committee, said on Thursday.

Even if Russia and the United States sign a new strategic arms reduction treaty, it may not be immediately ratified by the U.S. parliament, Mikhail Margelov, the head of Russia's upper house international affairs committee, said on Thursday.

Russia and the United States have been negotiating a strategic arms reduction pact since the two countries' presidents, Dmitry Medvedev and Barack Obama, met in April last year, but work on the document has dragged on, with U.S. plans for missile defense in Europe a particular sticking point.

START 1, the cornerstone of a post-Cold War arms control setup, expired on December 5, 2009.

Moscow and Washington have indicated that the new treaty is almost ready for signing. According to American analysts, it will probably be signed on April 5 in Prague. Russian sources say it may take place three days later. The actual date is expected to be announced soon.

Russia has insisted that the document should be ratified by the two countries' parliaments simultaneously.

However, Margelov told RIA Novosti the new treaty may face opposition in the U.S. parliament.

"The Democrats' prospects in the midterm elections to the Congress in the fall of this year are not clear; the Republicans are strong in opposition as usual," Margelov said.

Opposition to the new arms cuts treaty also exists in Russia, he said, with some experts "unreasonably talking about unilateral disarmament."

However, he said, "I believe neither the Duma [the lower house of the Russian parliament], nor the Federation Council [the upper house] will contest the validity of President Dmitry Medvedev's signature under this treaty."

He said the Russian-U.S. inter-parliamentary working group, which he heads along with U.S. Senator Ben Nelson (D-Neb.), will hold a meeting immediately after the new treaty is signed by the Russian and U.S. presidents, in order to discuss the ratification process.

Taking into consideration what he said was the Republican Party's intention to continue enlarging the U.S. anti-missile defense system and develop new nuclear warheads, as well as the Pentagon's opposition to Obama's nuclear doctrine, "the dialogue at the intergovernmental level will not be easy," Margelov said.

Meanwhile, he said, the new arms cuts pact is necessary for improving the international atmosphere and the further "resetting" of the Russian-U.S. ties.

So far, the course towards the "reset" in bilateral ties, announced by Moscow and Washington in April last year, appears to have only yielded results in the diplomatic sphere, he said.

"Russian-U.S. trade turnover decreased last year from $36 to $16 billion, some Russian companies are still under sanctions, and the Jackson-Vanik amendment [which tied trade relations to emigration rights in the Soviet Union] is still in force," Margelov said.