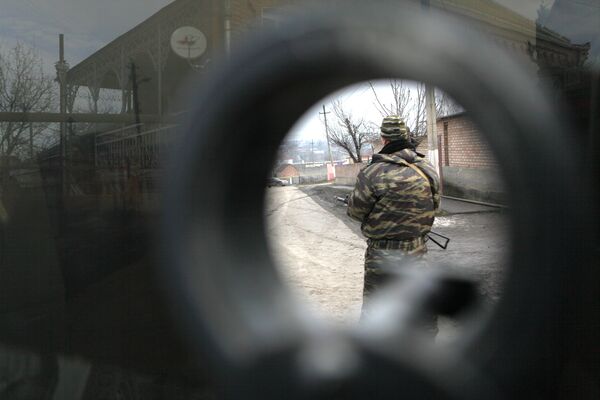 A leader of Wahhabi militants in Russia's North Caucasus republic of Kabardino-Balkaria has been killed in a special operation, the Russian Investigative Committee said on Thursday.

A leader of Wahhabi militants in Russia's North Caucasus republic of Kabardino-Balkaria has been killed in a special operation, the Russian Investigative Committee said on Thursday.

On Wednesday evening, two men resisted local security service personnel. During the shootout, one of the militants was killed, and the second wounded, but managed to escape. One police officer was also wounded in the operation.

"Investigators compared the fingerprints of the militant with existing fingerprint databases," a spokesman from the investigative committee said. "The dead militant was almost immediately identified as Anzor Astemirov, born in 1976, and the head of a gang," he said.

Astemirov is suspected of organizing an attack on the local drug control administration in December 2004, and militant attacks in the republic's capital of Nalchik in October 2005.

Astemirov was on an international wanted list for murder, terrorist attacks, arms trafficking and several other crimes.

Wahhabism is considered an extremist and intolerant form of Islam.

The Kremlin has pledged to wage "a ruthless fight" against militant groups but has also acknowledged the need to tackle unemployment, organized crime, clan rivalry and corruption as causes of the ongoing violence in the region.

On Monday morning the so-called emir of Grozny, Salambek Akhmadov, was killed during a special operation in the capital of Russia's North Caucasus republic of Dagestan