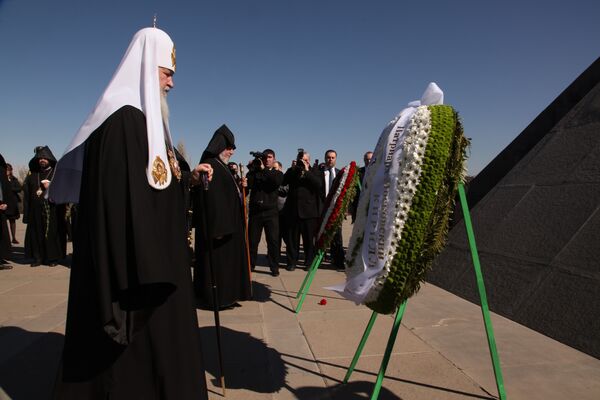 The head of the Russian Orthodox Church paid tribute on Wednesday to the victims of Armenian genocide, laying flowers to a memorial in the South Caucasus country's capital Yerevan.

The head of the Russian Orthodox Church paid tribute on Wednesday to the victims of Armenian genocide, laying flowers to a memorial in the South Caucasus country's capital Yerevan.

Turkey has always refused to recognize the killings of an estimated 1.5 million Armenians in the dying days of the Ottoman Empire in 1915 as an act of genocide. A number of countries have recognized the killings in Armenia as the first genocide of the 20th century.

Patriarch Kirill of Moscow and All Russia began a three-day visit to Armenia on Tuesday to meet the country's leadership and lay the foundation of a new Russian church.

Catholicos of All Armenians Garegin II, who leads the Armenian Apostolic Church, also laid flowers to the Tsitsernakaberd memorial dedicated to the victims of the genocide. Armenian priests then held a short service for the dead.

Kirill called on the Russian community in Yerevan to study Armenian and to actively integrate into society.

"I am calling on you to be active members of Armenian society, to make your contribution to its culture, to study the language so that nothing prevents you from actively participating in the country's public life," the Russian Church leader told hundreds of Russians who gathered in Yerevan's main Russian Orthodox church.

The patriarch said Christian roots are "the firmest basis for good relations" between Armenia and Russia and thanked Garegin II for promoting good relations with the Russian people. He also thanked Armenia for its respectful attitude toward the Russian language.

More than 90% of Armenians belong to the Armenian Apostolic Church, which is in dialogue but not in communion with most Eastern Orthodox Churches, including Russian, due to certain dogmatic differences.