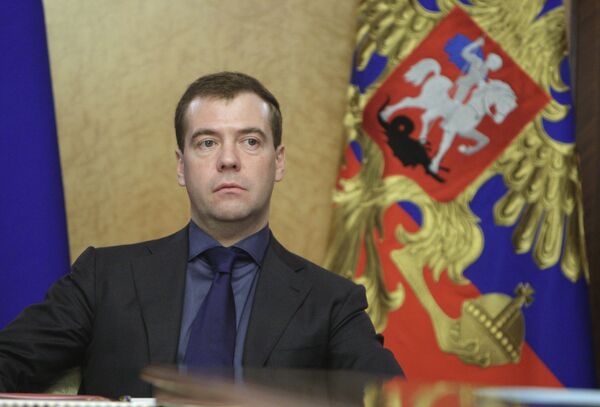 "I would like the government to adopt by October 1 a set of measures to implement the doctrine, including the development of the necessary regulations," Medvedev said.

Medvedev signed Russia's climate doctrine in December 2009 in the midst of the controversial UN climate summit in Copenhagen.

He insisted that the government integrate various programs aimed at tackling climate changes caused by man into the doctrine implementation.

Those programs, he said, should bring the doctrine up to date with the dramatic climate changes affecting Russia's Arctic and northern regions.

He also ordered that infrastructure facilities in regions with severe climatic conditions be thoroughly checked and repaired where needed.

Medvedev also spoke of the need for a global climate agreement, but one which would "answer the interests of Russia's sustainable development." But this, he said, would need a strong coordinated effort from all branches of Russia's government.

The president said the time was ripe for the government to work out a "mechanism to coordinate interdepartmental work, including not only monitoring and research components, but also diplomatic and informational aspects."
He said that while the 2009 Copenhagen Summit was a disappointment, with both developing and developed countries failing to agree on emission restrictions, Russia was determined to push forward strategies to reduce greenhouse gas emissions, saying the country could then meet its target of a 25% cut by 2020.
The UN climate summit in the Danish capital was originally expected to see the signing of a new agreement to replace the Kyoto Protocol, but countries only agreed to try to keep average increases in global temperatures below 2 degrees Celsius.
The Kyoto Protocol is a legally binding agreement restricting carbon emissions, some points of which expire in 2012. A new global climate deal is needed to continue efforts beyond 2012.