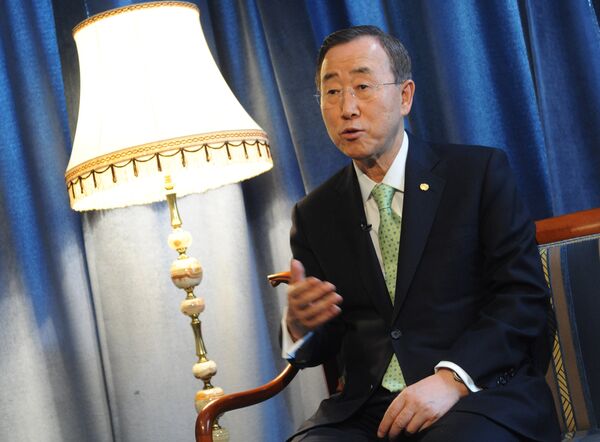 © RIA Novosti . Sergey Pyatakov
/
Go to the photo bank
Subscribe
The upcoming Moscow meeting of the Middle East Quartet comes at a "crucially important" time for talks between Israel and the Palestinian authorities.

The upcoming Moscow meeting of the Middle East Quartet comes at a "crucially important" time for talks between Israel and the Palestinian authorities, UN Secretary General Ban Ki-moon has told RIA Novosti.

Ban arrives in the Russian capital on March 17, two days ahead of the meeting of the Quartet of international mediators in Israeli-Palestinian peace talks. The Quartet is made up of Russia, the UN, the United States and the European Union.

"I appreciate, first of all, and highly commend the initiative and leadership of the Russian government to host the Quartet meeting at this time," Ban said in an exclusive interview. "This is crucially important timing for the peace process in the Middle East."

Ban noted that with "proximity talks" being facilitated by the U.S., "it is very opportune timing for the principles of the Quartet to express their support and to encourage further, to try to find out what kind of role the Quartet can play."

"I'm quite convinced that this time the Quartet leaders will be able to play a significant role," he added.

Ban will also meet with Russian President Dmitry Medvedev during his visit to Russia.

Hopes for peace talks were dampened when Israel announced on Tuesday it would build 1,600 new housing units in East Jerusalem. The move came shortly after the Palestinian authorities had agreed to participate in U.S.-mediated indirect peace talks after a 15-month break.

Jewish settlements on Palestinian territories are one of the main obstacles to continued peace talks with Israel.

"I have strongly condemned this settlement policy, which goes counter to the peace process mood," Ban said.

"The Quartet has already issued a strong statement condemning this settlement. And I'm sure that this will be reaffirmed by the Quartet meeting," he added.

"However, we will discuss the overall situation in the Middle East, including how to facilitate and encourage proximity talks. I believe that these proximity talks should eventually lead to direct negotiations between Israel and Palestinian authorities," the UN chief said.