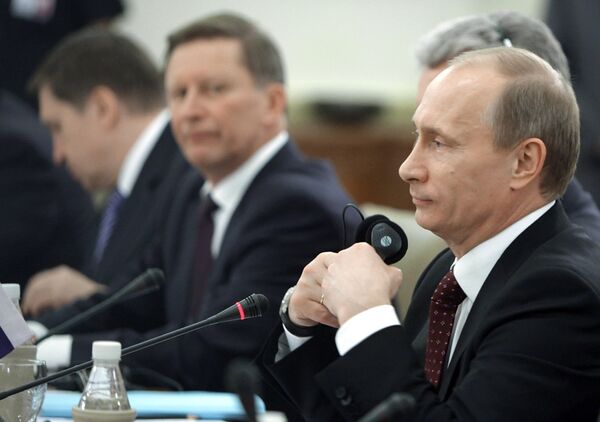 Russia and India signed on Friday a host of high-profile deals during Prime Minister Vladimir Putin's working visit to the country.

The visit kicked off late on Thursday, amid many expectations as well as big money.

Russia and India have signed a $1.5-billion contract on the supplies of 29 more MiG-29K Fulcrum-D carrier-based fighter jets to New Delhi.

The start of the supplies is scheduled for 2012.

The two countries signed an earlier contract stipulating the supply of 12 single-seat MiG-29Ks and four two-seat MiG-29KUBs to India in January 2004. The contract is part of a $1.5-billion deal to deliver the Admiral Gorshkov aircraft carrier, currently being retrofitted in Russia for the Indian Navy.

Indian and Russian officials said a contract on the joint development of the new fifth-generation fighter would be signed within the next few months.

The two countries have also signed a deal on upgrading the Admiral Gorshkov aircraft carrier, following an earlier statement from the Indian government's security committee that it would allocate $2.3 billion to retrofit the ship.

The initial refit agreement of $750 million went up by an additional $1.5 billion. In line with the contract, the aircraft carrier will be handed over to India by 2012.

The Admiral Gorshkov is a modified Kiev-class aircraft carrier, originally named Baku. The ship was laid down in 1978 at the Nikolayev South shipyard in Ukraine, launched in 1982, and commissioned with the Soviet Navy in 1987.

It was renamed after the collapse of the Soviet Union in 1991. In 1994, following a boiler room explosion, the Admiral Gorshkov sat in dock for a year for repairs. In 1995, it briefly returned to service and in 1996 was finally withdrawn and put up for sale.

Russia and India have signed several deals to establish a joint venture to produce navigation equipment for GPS and its Russian equivalent Glonass, including the use of the Glonass system for defense needs.

The Glonass navigation satellite system is expected to start operating worldwide by the end of 2010. As soon as global operations are launched, India will be able to use the civilian signal, allowing users to determine their position to within five to 15 meters.

India could provide Russia a third site for the construction of new nuclear power plants.

"There is Haripur, there is Kudankulam, and there will be another," said Sergei Kiriyenko, head of Russia's state-controlled nuclear power corporation Rosatom.

He did not indicate where the new site could be located.

He said a total of 12 nuclear power units are to be built at the first two sites.

Russian Deputy Prime Minister Sergei Ivanov said that under the new array of agreements just signed, up to 16 reactors would be built on "three construction sites."

SK Jain, chairman and managing director of the Nuclear Power Corporation of India (NPCIL), said Wednesday India had "an overall plan up until 2050" and in this context Russian participation was seen as "important."

He added that the cost of the reactors was $1,600 per kilowatt.

Russian company Atomstroyexport has been building two reactors for the plant since 2002 under a 1988 Indian-USSR deal.